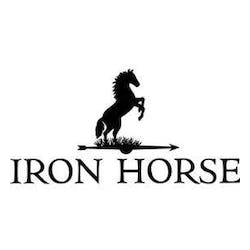 A pioneer in the Green Valley appellation within the Russian River area of Sonoma County, the Iron Horse family is building a legacy of prestige sparkling wines and elegant estate-bottled Chardonnay and Pinot Noir within a "holistic" environment of natural balance, cultivation and love of the land. Iron Horse is best known for its Sparkling Wines, which have been served at the White House since 1985, beginning with the historic U.S.-Russian Summit Meetings ending the Cold War, at the White House Millennium celebrations ushering in the new century, and at the White House dinner honoring the Pope. Their Chardonnay is considered a signature wine for the cool, foggy Green Valley region. Pinot Noir is the winery's rising star wine. Iron Horse has been named an American icon in a reference book published by Random House called "Icons of the American Market Place". Listed in alphabetical order, Iron Horse takes its place between iPod and Jack Daniel's, validating Iron Horse's reputation as a brand backed by pride, passion and quality. The Iron Horse name came from a train that cut across the property in the 1890s. The logo, the rampant horse on a weather vane, came from a 19th century weathervane found while clearing away the rubble to build the winery.

" The 2008 Classic Vintage Brut is a ‘classic’ blend of Pinot Noir and Chardonnay, a traditional and elegant showcase of the 2008 vintage, with

"New vintage, not yet reviewed. The Wine Advocate's Robert Parker and Wine Enthusiast awarded the previous vintage 91 points.The 2005 vintage was a finalist