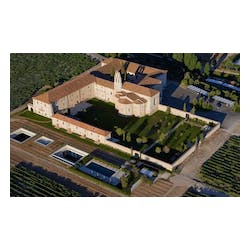 The Abadia Retuerta is a Spanish winery founded in 1996. The estate is situated just outside the border of the Ribera del Duero region in Spain's north central province of Castilla y León, near the village of Sardón del Duero. Twenty miles east of the city of Valladolid, it lies in wine estates stretching from Tudela de Duero to Peñafiel known as "the golden mile". Notably, it is just a few miles from Vega Sicilia, producer of Unico (wine).

Wine Advocate 92 "2017 and 2018 were very different years in the Duero, but at Abadía Retuerta, the killer frost from 2017 barely touched the vines.

Wine Advocate 92 The value among the reds is the 2015 Seleccin Especial, a blend of 66 Tempranillo, 24 Cabernet Sauvignon, 8 Syrah and 2 Merlot,

Robert Parker 88 "A blend of Tempranillo and Cabernet Sauvignon displaying aromas of spice box, incense, violets and black cherry. Savory and sweetly-fruited on the palate,

Wine Spectator 86 "Black cherry, tobacco and earth flavors mingle in this solid red, which has firm tannins and just enough acidity for balance. Tempranillo and