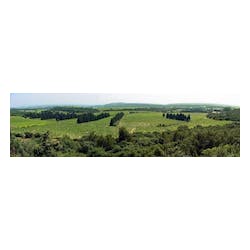 This 3-generation family estate currently manages 58 hectares of old vines (80 years on average) - 30 of which are in one single piece in the heart of the Lirac appellation (Gard). They produce wine in three appellations - TAVEL, LIRAC and CÔTES DU RHÔNE (with the Jean Alesi estate).This family owned and operated winery produces some of the best values in our portfolio. In 1994, Henri de Lanzac, cousin of the late Christophe Delorme from Domaine de la Mordorée, purchased the Domaine and began to improve the quality of the wine. "Ségriès" in provencal means "water spring". The Domaine Château de Ségriès owns 58 hectares of vineyard land (143 acres), all in old vines, 30 hectares in one piece alone:- 11 ha (27 acres) in Tavel, on limestone, pebble stone, sand and clay based soils.- 36 ha (89 acres) in Lirac, on clay and limestone based soils.- 7 ha (17 acres) in Côtes du Rhône.- 4 ha (10 acres) in Côtes du Rhône for the "Clos Jean Alesi"Many of the vines date back to 1925, and were planted by the former owner Count de Regis de Gatimel.The clay-limestone based soils contribute in an essential way to the quality of the wines, in the same way as the cultivation method and the traditional grape varieties that are used. The cultivation method reduces yields to favor quality, and uses short-term processes and limited use of traditional fertilizers. Mainly harvested by hand, vinified traditionally, privileging Grenache, Ségriès wines have body, warmth, roundness.

Vinous Media 91 "Lurid orange-pink. Mineral-accented aromas of ripe tangerine, cherry and pungent flowers, plus a suggestion of succulent herbs. Chewy and energetic on the palate,

"Owner Henri de Lanzac purchased Chteau de Sgris in 1994 from Count Henri de Regis, founder of the Lirac AOC. They use grapes from what

Jeb Dunnuck 88 A rock solid 2018 that has lots to love, the 2018 Lirac Cuve Rserve offers a meaty bouquet of black cherry and blackberry

Wine Enthusiast 92 September 2018 Issue Wine Advocate 89 "The 2017 Tavel seems to have an extra level of concentration than the 2016, offering a sturdy, almost tannic

Jeb Dunnuck 90 "Lots of Bing cherry and wild strawberry fruit as well as plenty of licorice and baking spices, emerge from the 2017 Lirac Cuvée

Jeb Dunnuck 91 "The 2016 Lirac Cuve Rserve, another terrific wine from this estate, is mostly Grenache blended with 30 Syrah and 10 each of Cinsault

Wine Enthusiast 90 "Full bodied and heavily extracted, this is a dark, plummy wine with almost chewy tannins on the finish. Yet the aromas remain fresh