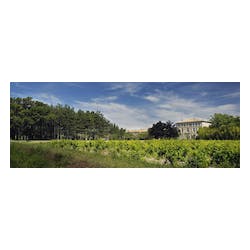 Guillaume Demoulin is the fourth generation of his family to farm the beautiful vineyards of Château de Trinquevedel. His great-grandfather, Eugène, bought the eighteenth-century château in 1936--an opportune decision that coincided with the establishment of Tavel's A.O.C that same year. However timely, the vineyards were in terrible disrepair, and Eugène had an enormous task ahead. By 1960, the grapes were finally producing wine worthy of the Demoulin's own bottlings, and the château had at last been restored to its former glory. Louis XIV was among the first to sing the praises of Tavel's delicious and memorable rosés, which only stands to reason given the appellation's grand cru reputation today. Tavel is the only A.O.C. entirely made up of rosé, which prohibits any whites or reds from wearing the label of this Southern Rhône cru. No more than sixty percent of the final blend can be made up of the noble Grenache. In other appellations where rosé is made, it is often regarded as an afterthought-- most of the grapes are frequently sourced from lesser parcels, as the lighter maceration of the grapes is seen as "wasting" precious juice. In Tavel, even the best parcels may contribute to the blend, yet another aspect that makes this cru so special.

Brilliant orange-pink. Pungent red currant, cherry and blood orange aromas, along with suggestions of lavender and chalky minerals. Chewy and focused on the palate, offering

Since the domaine lies just across the river from Châteauneuf-du-Pape, it makes sense that Grenache is the main grape in Tavel rosé, with a bit

Deep, bright pink, with purplish glint. Expressive nose of red fruits like fresh strawberry, blackcurrant bud. Round attack, powerful and full-bodied, with a beautiful and

" Deep, bright pink with purplish glint. Expressive nose on red fruits : fresh strawberry and blackcurrant bud. Round attack, powerful and full-bodied, with a

"The Rose wines of Château de Trinquevedel consistently enjoy aromas of ripe, red berries with notes of spices, licorice, flowers and garrigue. This is made