Item Sold Out
Notify me when this item is available
John Gilman 92
"The 2015 Mencía from Adegas Guímaro is an excellent wine, offering up a pure and complex bouquet of pomegranate, chicory, graphite, complex slate soil tones, a touch of blood orange and tree bark. On the palate the wine is pure medium-full and transparent, with lovely focus and grip, good mid-palate depth and impressive intensity of flavor on the long, complex, tangy and modestly tannic finish. This is a fine, classic and light on ... read more

John Gilman 92
"The 2015 Mencía from Adegas Guímaro is an excellent wine, offering up a pure and complex bouquet of pomegranate, chicory, graphite, complex slate soil tones, a touch of blood orange and tree bark. On the palate the wine is pure medium-full and transparent, with lovely focus and grip, good mid-palate depth and impressive intensity of flavor on the long, complex, tangy and modestly tannic finish. This is a fine, classic and light on its feet example of Amandi Mencía in the making and this is very, very impressive for an entry level bottling from Señor Rodríguez! 2017-2045.”

Wine Advocate 92
"I also got to taste the 2015 Guímaro which had just been bottled. They consider 2015 a warm vintage after the cold ones of 2013 and 2014, in line perhaps with 2012. The usual blend of Godello with 25% Treixadura, Albariño, Torrontés and Loureira was used for this white, which was kept in contact with the lees for some six months before bottling. For a wine that had just been bottled, it showed really well, it wasn't dizzy at all, it was open and aromatic, very balsamic, plenty of bay leaf aromas and somehow medicinal, developing aniseed and fennel aromas with some time. The palate is sharp and focused, with very good precision, fresh and mineral. Perhaps the secret to keeping the freshness in a warm vintage like 2015 was a couple of days of rain just before the harvest, which allowed the grapes to develop fully (they had not grown to 100% as it had been very warm) - and the fact that they harvested earlier. Treixadura and Albariño contribute to compensate the volume of Godello in the Amandi zone. Each year they also go for a slightly shorter maceration. Some 10,000 bottles were filled on February 14, 2016."

Wine Information
From multiple plots of Mencía vines with an average age of 40 years old, located in and around Amandi. The un-oaked tinto is all about immediate pleasure with pure, lush red fruits, spices, and slate-laden minerality. A wine to pair with all kinds of foods, especially chorizos, embutidos, roast pork, spicy foods, any dish with a lot of Pimentón. 4,000 cases produced.

View all from Adegas Guimaro 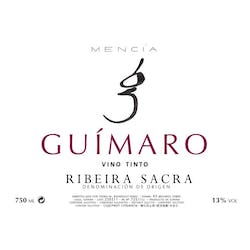 Cultivated since Roman times, Ribeira Sacra's steep terraced vineyards are some of the most picturesque and treacherous to work in the world of wine – think Douro, Cote Rotie, or Mosel. Like those most dramaticterruños, winegrowing here is not for the faint of heart; it takes spirited determination, unwieldy optimism, a sense of tradition, and a willingness to collaborate. All of these qualities are embodied by the young Pedro Rodríguez of Guímaro, our colleteiro in Ribeira Sacra.

Pedro descends from a long line of colleteiros working in the Amandi area, Ribeira Sacra's most prime subzone with south facing vineyards planted on slate, called Losa locally, just above the river Sil. His parents Manolo and Carmen still work the vineyards daily. They also maintain a small finca of mixed agriculture, very common in Galicia, raising chickens, rabbits, pigs, and cultivating a sizable vegetable patch. The culmination of the family's agrarian traditions manifested with the establishment of their adega, or winery, in 1991.

Before 1991, Pedro's family produced small quantities of wine for their own consumption and sold their wine in garrafones -20 liter glass containers- to local cantinas. It was an enologist from León and soon to be a close family friend, Luis Buitrón, who was instrumental in the creation of the Ribeira Sacra D.O. and helped the Rodríguez family begin estate-bottling their wines. They named their winery Guímaro, which means "rebel" in Gallego, a nickname of Pedro's grandfather. Guímaro was one of the first adegas to join the appellation in 1996.

In the beginning the wines were simple jovenes, young wines that showed the slate-infused freshness of lush red fruit and supple texture, the kind of wines the area of Amandi was known for. They continue that tradition with their un-oaked Tinto, an amazing value year in and year out.

In the early 2000's Luis Buitrón introduced Pedro -who by then was in charge of his family estate– to the great winemaker Raúl Pérez of Bierzo. Raúl helped Pedro see the potential of his old vine holdings to produce profoundly expressive and age-worthy single plot wines. This led to significant improvements in the vineyard, such as reducing yields of the commonly over-cropped Mencía grape, eliminating chemicals in the vineyards, and paying attention to the different plots' expositions, which greatly helps to preserve natural acidity in the grapes.

Old-fashioned winemaking methods were reclaimed as well: wild yeast fermentation, foot treading in open-top vessels, raspón (stems) inclusion, working with low sulfur, and aging in used barrels. This approach gives us Finca Meixemán, Finca Capeliños, and the new Finca Pombeiras, some of the most distinctive and age-worthy wines being produced today on the "Sacred Banks".

Never resting on his laurels, Pedro is leading his estate to organic certification. He has undertaken a massive project of planting heirloom grape varieties at the highest elevations in Amandi. Grapes like Caiño, Merenzao (Trousseau), Souson, Albariño and Treixadura will soon be part of Pedro's never-ending search for authenticity in his native land. With this ever-evolving approach, no doubt, the future is looking bright at Guímaro.