Item Sold Out
Notify me when this item is available
Wine Advocate 93
"First made in 2008, and available only through distribution (i.e. not via the mailing list), the 2010 Patrina is a perfect entry into the wines of the estate. Made from 100% Syrah (from a variety of estate vineyards) and aged two years in 70% new French oak, it’s one hell of an entry-level effort and boasts gorgeously pure aromatics (cassis, raspberry, flowers, spice), full-bodied richness and an overall layered, fresh profile that’s hard ... read more

Wine Advocate 93
"First made in 2008, and available only through distribution (i.e. not via the mailing list), the 2010 Patrina is a perfect entry into the wines of the estate. Made from 100% Syrah (from a variety of estate vineyards) and aged two years in 70% new French oak, it’s one hell of an entry-level effort and boasts gorgeously pure aromatics (cassis, raspberry, flowers, spice), full-bodied richness and an overall layered, fresh profile that’s hard to resist. While it doesn’t have the back-end depth of the single vineyard releases, it doesn’t skimp on texture and length. Enjoy it over the coming 5-8 years. Drink now-2021. Located at the very southern end of the Edna Valley and residing in its own little micro climate, Alban Vineyards, under the guidance of John Alban, is a reference point for Rhone varieties in the world today. Looking at the vintages reviewed here, both 2009 and 2010 are strong, with the 2009s possessing plenty of sweet fruit and relatively approachable profiles, and the 2010s showing slightly more structure, with lively acidity and big frames that will fill in once bottled. As is common with John’s Syrahs, these continue to gain in richness and depth as they mature in barrel (they see upwards of 4 years in barrel) and really don’t show all of their material and richness until 4-5 years after the vintage."

View all from Alban Vineyards 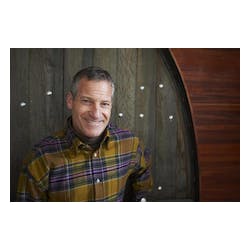 Alban Vineyards is the first important California wine producer and vineyard producer focusing on Rhone varietals. The actual winery is situated in Edna Valley, in the southern corner of the San Luis Obispo appellation. Of course other growers and wineries were using Rhone varietals, but he was the first producer completely devoted to grapes that were more at home in the Rhone Valley. Alban bought land in the Edna Valley, in San Luis Obispo in 1990. Of the different growing regions in the area, Edna Valley has the coolest climate, most resembling the Rhone Valley. John Alban began planting red and white grapes from Rhone varietals; Syrah, Viognier and Roussanne. The next year Alban added Grenache to the vineyard. He released his debut vintage a few years later with fruit from the 1992 harvest.

The next step was changing his vinification techniques, starting with destemming the berries, relying on natural yeasts and fermenting at higher temperatures for shorter periods of time.

Alban Vineyards consist of different soil types exposures and micro climates. For example, Seymour's comes from 8 acres of soils with more limestone and chalk. Reva is grown in soil dominated by clay and grave and Lorraine comes from a hotter, rockier terroir. Most of the vineyards are situated close to the winery while Seymour's is located at the rear of their vineyards. All told, Alban has 66 acres under vine. On average, they produce close to 6,000 cases of wine per year. Alban has also been used as a grape source for other vintners, most notably Sine Qua Non. Au Bon Climat, Failla and Mat Garretson and others have also used their fruit.

Alban Vineyards currently producers a wide range of wines including Viognier, Roussanne, Syrah, Grenache and Mourvedre. The top wines are their Syrah; Seymour's, Reva, Lorraine and Patrina. Additionally they produce two Grenache based wines of which Pandora Proprietary blend is the finest. For their Mourvedre, that is used to produce the Forsythe, which is made from 100% Mourvedre.

Alban is not a shy, delicate style of wine. The wines are big, bold, ripe, concentrated and at times, the wines can even seem over ripe or too powerful for some tasters. The wines of Alban Vineyards can age well.