Established in 1985 by Frank and Karen Altamura, Altamura Vineyards and Winery is the sole winery situated in the historical farming region of Wooden Valley, located  ... read more

Established in 1985 by Frank and Karen Altamura, Altamura Vineyards and Winery is the sole winery situated in the historical farming region of Wooden Valley, located within the eastern foothills of famed Napa Valley. Altamura is the first to capture the unique characteristics of Wooden Valley in a bottling. Napa native Frank and Karen have a decidedly hands-on approach to every step of the growing and winemaking process. Thus, a natural production limit is established and the wines reflect the Altamuras' deep commitment to reflecting the terroir of their Wooden Valley Ranch.
About Altamura Vineyards and Winery
Frank Altamura's lifelong pursuit as a winemaker is fueled by his passion for viticulture. Born and raised in Napa Valley, Frank began working with his cousin, a vineyard manager, right out of high school and knew that this would be his life's calling. Formal viticultural training began at Sterling Vineyards in 1976 where he began to explore what winemakers were looking for from the vineyard. This concept was further developed from the winemaker's perspective at Caymus with mentor Charlie Wagner.

The 400 acre Altamura Ranch in Wooden Valley is host to 65 acres of hillside and valley floor vineyards at elevations of 700 to 1,000 feet. The approximately 12 different soil types and microclimates carry distinguished traits found in other areas of the Napa Valley and required a rigorous site selection process prior to planting. Using the U.S. Department of Agriculture Soil Survey of Napa County as a guide, Frank identified soil types on his ranch that were similar to the Rutherford Bench and the mountainous regions of Howell Mountain, Pritchard Hill and Mount Veeder. As a result, several different clones of Cabernet Sauvignon on a number of different rootstocks were utilized for the initial planting and replanting of existing vineyards in 1986. The 5 acre Sangiovese vineyard was also planted in 1986 on a western facing hillside in nutrient-poor soils perfect for the vigorous varietal. In addition to Cabernet Sauvignon and Sangiovese, a small amount of Sauvignon Blanc and Nebbiolo are grown on the Ranch.
View all Altamura Vineyards and Winery 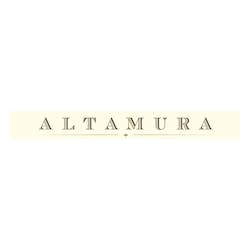