Wine Advocate 92
"The regional blend 2020 Camins del Priorat, produced with grapes from 101 plots from eight villages in Priorat, is a blend of 55% Garnacha, 15% Syrah, 12% Cabernet Sauvignon, 10% Merlot and 8% Cariena, higher in Garnacha and lower in Cariena, like in the majority of 2019s. That gives the  ... read more

Wine Advocate 92
"The regional blend 2020 Camins del Priorat, produced with grapes from 101 plots from eight villages in Priorat, is a blend of 55% Garnacha, 15% Syrah, 12% Cabernet Sauvignon, 10% Merlot and 8% Cariena, higher in Garnacha and lower in Cariena, like in the majority of 2019s. That gives the wines freshness and elegance, vivacity and fluidity. It fermented with the indigenous yeasts in a combination of stainless steel, oak and concrete vats and matured in barrel and oak vats for four months. This is more Priorat than any of the vintages of Camins; in reality, nobody is planting French varieties anymore and many are regrafting their vines, so in the future, the tendency could be toward more Garnacha and Cariena in this wine. This is a very drinkable version of Camins, less dense than the 2019, from a year that was cooler with just an herbal hint. The mouthfeel is velvety with great freshness and very fine tannins. This has to be the finest Camins to date, different from previous years; it should be a commercial success."
About Alvaro Palacios
If anyone embodies the promise and spirit of "The New Spain," it is Alvaro Palacios. His L'Ermita is widely considered--along with Peter Sisseck's Dominio de Pingus-- to be the most important Spanish wine in a generation. One of nine children born to the owners of Rioja's respected Palacios Remondo, Alvaro studied enology in Bordeaux, while working under Jean-Pierre Moueix at Ch. Pétrus. He credits his tenure at Pétrus for much of his winemaking philosophy and for showing him "the importance of great wines." Alvaro could have returned to the security of his family's domaine. Instead, he was drawn to remote and wildly beautiful Priorat, 60 miles from Barcelona, which had been one of Spain's important pre-Phylloxera wine regions. With its unique terroir of steep hills and terraces Alvaro believed that here he could make a wine that was like a cross between Pétrus and Grange. He acquired his first vineyard, Finca Dofí, in 1990. Then, in 1993, he located what is now regarded as the crown jewel property in Priorat, a precipitous, northeast-facing Garnacha vineyard on well-drained schist that had been planted between 1900 and 1940. Alvaro named it for a small chapel, or hermitage, that sits atop the hill - L'Ermita.

L'Ermita - from a dramatically steep 2-hectare north-facing vineyard of 70 year old, head pruned vines. The wine is mostly Garnacha with a touch of Carinyena (Carignan) and Garnacha Blanca.

Finca Dofí--from Alvaro's original vineyard, Finca Dofí is all Garnacha. Like L'Ermita, Dofí combines power and richness with great breed and finesse. In most Priorat tastings that do not include L'Ermita, Dofí is the clear winner.

Gratallops--Alvaro has been instrumental in introducing the Burgundian ideas of Villages and Cru to Priorat. In 2006, he began to elaborate separately a collection of old vineyards from throughout the township of Gratallops to extend and commercialize this idea. The wine is a blend of Garnacha, Carinyena (Carignan) and Cabernet.

Les Terrasses "Velles Vignes"--While originally conceived of as a value wine, Les Terrasses "Velles Vignes" has slowly evolved into the essence of what makes Priorat special. Drawing on 15+ years of study, Terraces is sourced from many of the region's steepest and oldest vineyards--many of them north-facing to avoid the intense afternoon sun. With the 2007 vintage, Alvaro acknowledged Les Terrasses' "graduation" by adding the "Velles Vinyes" designation to the label. This wine is a blend of Garnacha and Carinyena (Carignan).

The evolving seriousness of Terrasses eventually left room for a new wine, Camins del Priorat. Alvaro had never wanted to be known solely for expensive "trophy" wines, and with Camins, he found the opportunity to create something special. Drawing on his wealth of vineyard sources, Alvaro is aiming to produce a wine that is affordably priced, but which also stays true to his vision of Priorate powerful but elegant, approachable but restrained. The wine is a blend of Garnacha, Carinyena (Carignan), Cabernet and Syrah."
View all Alvaro Palacios 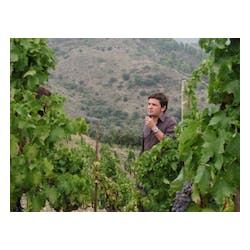