Ship "12" Free when you mix or match a 12 bottle case! more...
Alvear Pedro Ximenez de Anada 2018 375ml ships free when purchased by the 12 bottle case! — Fill a 12 bottle case with this item or any of our other 400+ eligible free shipping items and that case ships for free! Note that there is no limit to the number of cases you can have shipped for free so long as they are filled with eligible "Ship 12 Free" items.
PLEASE NOTE:  this is a 375mL (wine) which is smaller than a regular 750mL bottle.
Denominacion de Origen:D.O. Montilla-Moriles
Location: The winery is located in Montilla. The vineyards are located on the hills of the Sierra de Montilla.
Varietal: 100% Pedro Ximénez, whose historical origins lie along the Rhine river in Germany.

Vineyards
The Alvear family owns 310 acres (125 Ha.) of vineyards located in the most famous pagos of la Sierra de Montilla, Moriles, and Las Puentes. The Alvear family also works with viticulturists that have traditional, long lasting relationships with the family.

Denominacion de Origen:D.O. Montilla-Moriles
Location: The winery is located in Montilla. The vineyards are located on the hills of the Sierra de Montilla.
Varietal: 100% Pedro Ximénez, whose historical origins lie along the Rhine river in Germany.

Vineyards
The Alvear family owns 310 acres (125 Ha.) of vineyards located in the most famous pagos of la Sierra de Montilla, Moriles, and Las Puentes. The Alvear family also works with viticulturists that have traditional, long lasting relationships with the family.

Viticulture
The primary vineyard is situated on the Alvear family estate. The location of the family’s Lagar de las Puentes, located inside the family’s vineyard, ensures that the grapes arrive to the processing facilities in optimal conditions.

Soils
Albariza. Rich in calcium carbonate, with the soil and subsoil composed of soft marlstone, a type of soil composed mostly of limestone and mud. These soils are poor in organic matter, infertile, of a simple mineral composition, with a very crumbly consistency. The different horizons of the soil structure have a high level of water retention, and as a result, the majority of the vines’ root structure is developed in the first 23.5” of the soil. That being said, the vines’ primary roots can reach 13’ into the soil.

Winemaking
This sweet wine is obtained by drying the Pedro Ximénez grapes on mats in the sun. Due to the abundance of natural sugars that are accumulated during the ripening process, the wine will reach 17% alcohol naturally.

History
Founded in 1729, Bodegas Alvear is one the most prestigious and oldest family run wineries in the world. It is the second oldest winery in Spain and the oldest in Andalucía. Focused on producing the finest wines in Andalucía from the Pedro Ximénez variety, the current 8th generation of the family upholds the tradition established by Diego de Alvear y Escalera several centuries ago. Although the variety Pedro Ximénez is commonly understood as the sweet wine from Jeréz (sherry), it is actually its own variety – believed to have been brought to Spain by a soldier of the Spanish tercios by the same name after his tour in the 16th century Eighty Years’ War. The vast majority of Pedro Ximénez plantings are located in D.O. Montilla-Moriles, a high altitude rolling terrain surrounding the city of Cordoba.

Vineyard
Bodegas Alvear sources all of the fruit for their wines from estate grown owned vineyards of Pedro Ximénez planted in the highest altitude subzones of D.O. Montilla-Moriles. Although not as well known in the American market as Jeréz (due to the fact that sherry has been a common export product for Anglo-Saxon countries for centuries) Montilla-Moriles has undoubtedly a superior terroir to its southern cousin. In Montilla, the same Albariza soils that Jerez is famous for dominate, and the baked chalky soil provides a fresh minerality to the Pedro Ximénez that phenomenally balances the variety’s typical rusticity. On top of that, many of Alvear’s best vineyards are located at over 600M above sea level, in the Sierra de Montilla, bearing the historical classification of Calidad Superior [Superior Quality, Sierra de Montilla], a Burgundy-style grand cru as a reference
for high quality. providing a terrific balance of ripeness and acidity that result in world class wines.

Winemaking
Alvear’s biggest asset due to the use of Pedro Ximénez is that the grape can naturally reach 15-16% alcohol by volume on the vine – levels that Palomino could never reach. The result is that Alvear never fortifies their Finos or Amontillados (or Palo Cortados for that matter) and they only use fortification in their olorosos or sweet wines. Alvear Pedro Ximénez de Añada is a vintage dated sweet wine from the estate’s Pedro Ximénez vineyards. The grapes are harvested at typical levels of ripeness, and dried in the blazing Montilla sun on mats in the vineyards. The wine is vinified in open clay amphora, and fortified to halt the fermentation.

View all from Alvear Winery 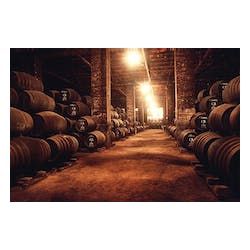 "Alvear is one of the most prestigious and internationally renowned bodegas in Andalucía, boasting extensive vineyards that are located in the most famous estates in the Sierra de Montilla y Moriles (Córdoba). This privileged land's star grape variety is Pedro Ximénez, which is thought to have originated in the Rhine region, and is used by the bodega as the unique base wine for its sweet, Fino, Oloroso and Amontillado wines."