Wine Information:
The Santa Cristina is a blend of 75% Sangiovese, 10% Cabernet Sauvignon, 10% Canaiolo and 5% indigenous varietals. Yields are about 40 HL/HA. A two day cold soak ensures depth of color and tannic structure. After fermenting in stainless steel, half the wine is moved to French barrique, while the other half sees larger oak casks.

" The Carmignano DOCG region, located northwest of Florence, was the first Italian region to officially allow Cabernet Sauvignon in a blend; the varietal has been grown in the region at least since the early 18th century. Today’s regulations allow up to 50% of “complementary grapes”, with a required minimum of 10% Cabernet Sauvignon and/or Franc, to be blended with main component Sangiovese. A cooler area for Sangiovese production, wines from Carmignano tend to be aromatic and fragrant, yet leaner than the wines from more the southerly Chianti Classico regions.

Fattoria Ambra has belonged to the Romei Rigoli family since 1870. The estate is located near the Ombrone river and the Villa Medicea of Poggio a Caiano. It is named after the poem "Ambra", written in the 15th century by Lorenzo Il Magnifico.
The vineyards stand in the hills of Montalbiolo, Elzana, Santa Cristina in Pilli and Montefortini, four of the most important crus of Carmignano.

Winemaker/owner Giuseppe “Beppe” Rigoli, president of the Department of Agriculture at the Department of Pisa, is the only producer in Carmignano who bottles single-vineyard wines from his family's 20 hectare estate. There are five separate bottlings: the two Riservas; “Elzana” (clay and schist soil), which is almost entirely Sangiovese (92 points for the 2004 vintage from the Wine Advocate), and “Vigne Alte” (clay and schist soils), a 75% Sangiovese wine from hillside vineyards; as well as the Carmignano “Santa Cristina” (limestome soils) and "Montefortini" (sandstone soil), from two vineyards planted on more level ground. Ambra's Barco Reale di Carmignano (limestone and sandstone soils) is the typical easy-drinking wine of the region – a fresh, fruity and youthful blend of Sangiovese, Canaiolo, Cabernet and Merlot vinified in cement tanks and tonneaux.

Integrated insect and disease control has been implemented in the vineyards since 1995. Insect pests are controlled through pheromone traps. sulfur- and copper-based products are predominant. Only organic fertilizers are utilized. Depending on the type of soil and on the vigor of the vines, in parts of the vineyards leguminous plants and grasses are sown, after the harvest, between the rows of vines. The crops are left among the rows during the winter to be mowed during springtime and then tilled into the soil to incorporate the plant substance (knowns as "green manure") into the ground. In the rest of the vineyards the soil is tilled. No herbicides are used. Very limited amounts of SO2 is added to the wines. " ~ Winery notes
About Fattoria Ambra
Fattoria Ambra has belonged to the Romei Rigoli family since 1870. The estate is located near the Ombrone river and the Villa Medicea of Poggio a Caiano. It is named after the poem "Ambra", written in the 15th century by Lorenzo Il Magnifico. The vineyards, of an extension of 20 hectares, stand in the hills of Montalbiolo, Elzana, Santa Cristina in Pilli and Montefortini, four of the most important crus of Carmignano. DOCG Carmignano is bottled as "Riserva Montalbiolo", "Riserva Elzana", "Montefortini - Podere Lombarda" and "Santa Cristina in Pilli". The blend is mostly Sangiovese together with Cabernet Sauvignon, Canaiolo Nero, Colorino, Merlot and Syrah. A young version of Carmignano, "Barco Reale", and a rosè wine, "Vin Ruspo", complete the range of wines.
View all Fattoria Ambra 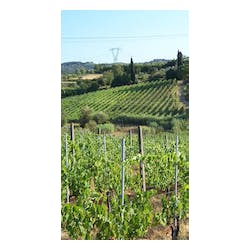