$20.95
A glorious color along the lines of pale cider. And the aromatics are also indicative of apple as well as pear. In the mouth it has a slightly rich texture, due no doubt to the times spent fermenting on its skins. There is further apple tones in addition to a nutty quality on the finish, alongside pure - fresh acidity.

A glorious color along the lines of pale cider. And the aromatics are also indicative of apple as well as pear. In the mouth it has a slightly rich texture, due no doubt to the times spent fermenting on its skins. There is further apple tones in addition to a nutty quality on the finish, alongside pure - fresh acidity.

The 1st vintage of Bianco di Ampeleia was 2016. A neighbor's vineyard had old vines of a local biotype of Trebbiano Toscano; Ampeleia used its cuttings and starting planting in 2013, between Ampeleia di Mezzo and Ampeleia di Sopra (300-600m with varied soil composition). The vineyards were planted to 90% Trebbiano, 5% Ansonaco (aka Ansonica aka Inzolia), and 5% Malvasia. In true field-blend fashion, the three varieties are interspersed through the vineyard. The grapes were co-harvested at yields of 50hl/ha in mid-September and co-fermented in concrete vats, with 7-10 days contact with the skins. It aged on its lees for 6 months in concrete. 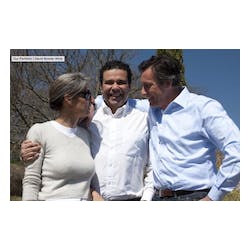 Ampeleia is one of the stars of the Tuscan coast.....At their best, the Ampeleia wines are among the most pure, transparent expressions of the coast readers will find. Elisabetta Foradori and her team are doing important work here. Ampeleia is a young estate. There is every reason to believe the best is yet to come." --Antonio Galloni, September 2014

Ampeleia was born in 2002 from the collaboration and friendship between Elisabetta Foradori, Thomas Widmann, and Giovanni Podini; they saw in Ampeleia a place where they could not only develop an agricultural project but also fulfill a common vision. The project aspires to represent the inherent diversity and huge potential of this particular area of Maremma, the "Colline Metallifere," which are not the coastal lowlands one usually associates with the Maremma, but mineral-rich hills that have been mined since Etruscan times.

The estate results from the purchase of different plots of land, located far apart and on different altitude levels, with the precise aim of creating a great variability in altitude, soil type and microclimatic conditions; each vineyard has a distinctive identity that is enhanced by the uniqueness of the surrounding environment. Variety is the keystone and soul of Ampeleia. In fact, variety represents the project's constant quality, both physically and symbolically, and is harmoniously expressed in its wines that taste of the varied lands of the area around the village of Roccatederighi. Many of the grape varieties that have been planted in Ampeleia are common in Mediterranean farmlands. In past times, vineyards were not planted with just one grape variety but many types of grapes were present and they were all harvested at the same time; the vineyards at Ampeleia reflect this tradition.

Within this diversity, the estate focuses on Cabernet Franc (planted in the early 1960s) and Alicante Nero, a distinctly Tuscan biotype of Grenache. Though Ampeleia owns around 130 hectares of land, only 35 hectares are planted to vine, in an attempt to keep the landscape intact to promote biodiversity.

Ampeleia di Sopra: 70 hectares, 15 under vine; this is the largest land unit of the estate. Placed between 450 and 600 meters above sea level, it is mainly planted with Cabernet Franc. The landscape here is dominated by chestnut groves.

Ampeleia di Mezzo: 35 hectares, 10 under vine. This is the land of Sangiovese. Divided into small plots that range from 250 to 350 meters above sea level, the vineyards, surrounded by cork oak woods and Mediterranean scrubland, are planted with Carignan, Grenache and Sangiovese.

Ampeleia di Sotto: 15 hectares, 10 under vine. This section of the estate includes the plots closest to the sea, and are the most distinctly Mediterranean in character. The vineyards, found around 200 meters above sea level, are planted with traditional Mediterranean grape varieties, mainly Grenache.