Item Sold Out
Notify me when this item is available
Robert Parker 94
"The 2007 Ciel du Cheval is a blend of 45% Cabernet Franc, 40% Merlot, and 15 % Cabernet Sauvignon aged in 40% new French oak for 20 months. Medium purple in color, it offers up an enticing nose of pain grille, pencil lead, herbs, olives, violets, cassis, and black currant. Ripe, smooth-textured, and mouth-filling, it has enough structure to evolve for several years. This lengthy effort will offer prime drinking from 2013 to ... read more

Robert Parker 94
"The 2007 Ciel du Cheval is a blend of 45% Cabernet Franc, 40% Merlot, and 15 % Cabernet Sauvignon aged in 40% new French oak for 20 months. Medium purple in color, it offers up an enticing nose of pain grille, pencil lead, herbs, olives, violets, cassis, and black currant. Ripe, smooth-textured, and mouth-filling, it has enough structure to evolve for several years. This lengthy effort will offer prime drinking from 2013 to 2027.

Andrew Will, located on Vashon Island, a short ferry-ride from Seattle, is where Chris Camarda fashions his blended, Bordeaux-style wines. Without prompting Camarda told me (as he did Lettie Teague in a Wall Street Journal interview) that business has been very difficult, that he is cutting production, and that in the 2008 vintage he has fashioned two varietal wines that can sell within the range that American wine consumers are willing to spend. That said, the current releases of Andrew Will wines from the 2007 vintage are as good as or better than anything Camarda has done before. "

View all from Andrew Will Winery 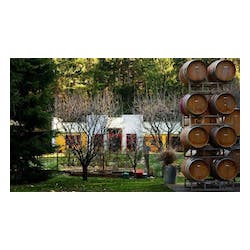 "Over the nearly quarter-century during which manifestly talented and straight-talking Chris Camarda has been making wine under his Andrew Will label (on Vashon Island south of Seattle) his approach – which has always favored modest alcohol and elegance over flamboyance – has evolved significantly in method as well as in focusing increasingly on single-vineyard expression." – David Schildknecht, Wine Advocate.

Winemaker Chris Camarda launched Andrew Will Cellars (Named after Chris's son Will and Nephew Andrew) with their inaugural 1989 vintage, working out of a humble 60' by 10' winery, and he has spent the last two decades producing some of Washington's most well respected wines. Structured, elegant, and age worthy, they are a singular voice that has never adjusted to chase scores or suit trends.

Although always a focus, Chris' attention to terroir has only intensified over time. Since 2001 he almost exclusive produces single vineyard blends as he feels this shows the terroir more clearly than a single varietal bottling. Currently he only sources from four vineyards that he feels provide the finest fruit, Champoux, Discovery, Two Blondes, and Ciel du Cheval.

All of the wines are treated more or less the same in the cellar; 25-35% new oak barrels, aged for around 21 months, followed by a year of aging in bottle. Production is around 4500 cases.