store shelf
Decanter d 97
Winery: Estate Argyros
Category: Other White Wines
Size: 750mL (wine)
Alcohol by vol: 14.5%
Closure: Cork
Item ID: #48053
Location at store: 141e
Region: Greece » Santorini
Other Similar Items
$37.95
Domaine Sigalas 'Santorini' Assyritko 2021
$29.95 D 98
Shaw & Smith Shiraz 2019
$56.95 WE 97
Rizzi 'Pajore' Barbaresco 2019
$47.95 WA 96
Joseph Phelps 'Freestone' Pinot Noir 2019
$67.99 JS 96
Renieri Brunello di Montalcino 2016
$39.95 JD 96
Hartford Court 'Four Hearts' Chardonnay 2019
$59.95 D 96
Zenato Amarone Classico DOC 2017
$56.95 JS 96
Mastroberardino 'Radici' Taurasi Riserva 2015
$49.95 WS 96
Salcheto 'Salco' Vino Nobile 2016
$60.95 WA 96
Sottimano 'Basarin' Barbaresco 2016
$33.95 D 96
Taille Aux Loups Montlouis Clos De Mosny 2020
$26.95 D 96
Ravines 'Argetsinger' Dry Riesling 2019
Information
Questions
Size / Vintage Options
Reviews
Item Description
Decanter 97
“A tropical fruit basket with tutti frutti complexity. The wine opens with a ripe and juicy peach aroma that opens onto a palate of great freshness with minerals and lemons. An outstanding wine with balance and concentration. “
About Estate Argyros
In 1903 George Argyros, owner of a 5 acres vineyard located in Episkopi Gonia Santorini, founded Estate Argyros in order to turn to advantage the grapes produced by his own vineyard. The winery he constructed was a small plant basically equipped and he made his wines according to the traditional Santorinian way. The produced wines were dry white wine (nihteri), dry red wine (brousko) and vinsanto, sold only in the local market.
In 1950, the Estate passed to his son, Matthew Argyros, who expanded the vineyard to 15 acres, without though significant changes in the winery.
The person who changed dramatically the image of the winery was the founder's grandson Yiannis Argyros who runs the winery since 1974. Yiannis Argyros not only has increased the family vineyard to 65 acres but he has also rebuilt the winery transforming it into a modern plant aiming to combine tradition with modern technology.
Yiannis Argyros is a winelover who works very hard to obtain high quality grapes in order to make superior quality wines. And there are many professionals in the Greek wine market who think of Yiannis Argyros as the best Greek winemaker in dry white wines and dessert wines.
His efforts to produce high quality wines have been worldwide acknowledged, as indicates the award by the Wine & Spirits Magazine as one of 100 best wineries in the world for 2005 and 2006.
View all Estate Argyros 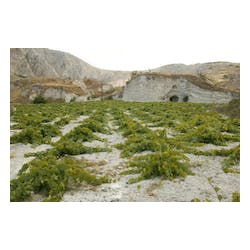