70% Frappato/30% Nero d'Avola. The two varietals are native to Sicily and are grown on red sand soils over limestone rock, with vines averaging 15 years old on four different sites. The vines are organically farmed and hand-harvested. The fruit is mainly destemmed (4% stem inclusion in the upcoming 2017 vintage) and co-fermented with native yeasts in concrete tanks and with a two-week skin maceration. The wine is aged in concrete tank for 8 months and bottled unfiltered. The wine is named "SP68" for the road near Arianna's home vineyard in Vittoria.

View all from Arianna Occhipinti 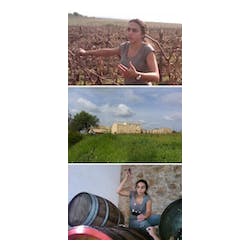 Occhipinti is located in Vittoria, in the southwestern corner of Sicily, and winemaker Arianna Occhipinti's reputation seems to grow with every vintage. Her first vintage was 2004, though it wasn't until 2005 that her wines were internationally distributed. Arianna has a total of 10 hectares of Nero d'Avola and Frappato vines that, since April of 2009, have been farmed using biodynamic methods, which she believes has added to the overall expression of the soil. The grapes, planted largely on chalky soils, are trained using albarello or guyot and are left to vigorously grow leaves so as to maintain freshness. Fermentation for Frappato takes place in stainless steel while the Nero d'Avola is fermented in large plastic tubs though her goal is to eventually ferment everything in cement. Maceration for the Nero d'Avola is 30-40 days and longer for the Frappato.

In addition to the monovarietal wines, Arianna makes a blend of Nero and Frappato called SP68. Named for the road going past her house, the wine is made like a Cerasuolo but is labelled as IGT Sicilia as Arianna does not always want to age the wine for the minimum 18 months in barrel required by the authorities.