Item Sold Out
Notify me when this item is available
While this item isn't currently available:
Wine Spectator 90
" According to Wine Spectator - Glides along, offering an alluring mix of dense, dark blueberry, melted black licorice, grippy loamy earth and tannins that give the flavors traction. Impressive on the finish. This will appeal to those who like to chew on their reds. Cabernet Sauvignon, Merlot, Petit Verdot, Cabernet Franc and Malbec. Drink now through 2022. "

Wine Spectator 90
" According to Wine Spectator - Glides along, offering an alluring mix of dense, dark blueberry, melted black licorice, grippy loamy earth and tannins that give the flavors traction. Impressive on the finish. This will appeal to those who like to chew on their reds. Cabernet Sauvignon, Merlot, Petit Verdot, Cabernet Franc and Malbec. Drink now through 2022. "

View all from Beaulieu Vineyards 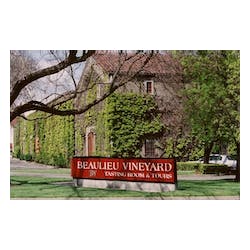 "Beau lieu" - A Beautiful Story about a Beautiful Place

In 1900, when Georges de Latour's wife, Fernande, first laid eyes on the land that would become their original Rutherford vineyard, she named it "beau lieu," or "beautiful place." Shortly thereafter, de Latour sold his thriving cream of tartar business, bought the four-acre ranch and founded Beaulieu Vineyard with the vision of making Napa Valley wines that would rival those of his native France.

De Latour quickly made a name for himself by importing Phylloxera-resistant rootstock from Europe to the recently-ravaged fledgling California wine industry. He also began selling wine to the Catholic Church, establishing a strong relationship that would allow Beaulieu Vineyard to become the only Napa Valley winery to remain in business during Prohibition.

In fact, during Prohibition the winery increased its business. After the repeal in 1933, de Latour began searching for someone who could contribute European winemaking expertise. In 1938, he traveled to France and returned with André Tchelistcheff, famed viticulturist and enologist who instituted the philosophy of continuous innovation in vineyard and winery to which we remain dedicated today. Tchelistcheff introduced cold fermentation for white wines, malolactic fermentation for reds and aging red wines in small, French oak barrels. He also tasted the de Latour family's private wine-what they called "Private Reserve"-from the 1936 vintage. This Cabernet Sauvignon-based wine was so distinctive that Tchelistcheff insisted it be bottled and sold as the winery's flagship offering. The result was the inaugural release of Georges de Latour Private Reserve Cabernet Sauvignon, a wine that was destined to become Napa Valley's first "cult" Cabernet.

Today we continue to turn to innovative practices to craft wines in our bold, classic style. We have become a leader in clonal research, and our BV Clone Reserve Cabernet Sauvignon wines are highly acclaimed. Most recently we completed a new state-of-the-art winery within one of our original buildings. The Georges de Latour Private Reserve Winery utilizes the latest technology in combination with time-honored traditions for the production of this exceptional, wine-the longtime benchmark of Rutherford Cabernet.