As she says, "Dream big Bellissima dreams, and may they all come true!"
View all Bellissima by Christie Brinkley 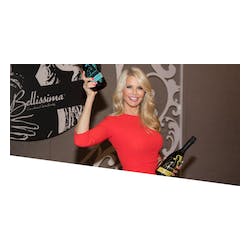 No questions posted yet about this item.
Great sparkling!
"Great sparkling!"
Posted byKen on Jan 31, 2019Verified Purchase
Delicious
"I enjoyed this rose and shared it with friends over the Christmas holidays."
Posted bySue on Jan 12, 2018Verified Purchase
Great wine to have for yourself or as a gift
"Taste great and my girlfriend's family loved it. Bottle looks very classy and they enjoyed the bottle very much"
Posted byDaniel on Oct 30, 2017
"it was pink on QVC but not with my bottles"
Posted byCarolyn on Feb 12, 2020Verified Purchase
Subscribe to our newsletter!