5 of 5 (2 reviews)
Item Sold Out
Notify me when this item is available
While this item isn't currently available:
Wilfred Wong 91
When I first saw the Benton Lane "postage stamp" label in the mid-1990s, I was already hoping that wine would taste good. As soon as I realized that Steve and Carol Girard, whom I had known from their fine work at the Girard Winery in the Napa Valley, were behind the wines, I got excited. This Oregon adventure has been on point and met all expectations. TASTING NOTES: The 2014 Benton Lane Pinot ... read more

Wilfred Wong 91
When I first saw the Benton Lane "postage stamp" label in the mid-1990s, I was already hoping that wine would taste good. As soon as I realized that Steve and Carol Girard, whom I had known from their fine work at the Girard Winery in the Napa Valley, were behind the wines, I got excited. This Oregon adventure has been on point and met all expectations. TASTING NOTES: The 2014 Benton Lane Pinot Noir simply speaks of the grape variety. This wine offers bright red fruits, some dried herbs, and a touch of the soil. Its characteristics meld well into one another. Pair its flavors with grilled lamb chops. (Tasted: March 1, 2018, San Francisco, CA)-WW

Steve and Carol Girard have been owners of Benton-Lane since 1988. Carol and Steve shared a passionate desire to produce great Pinot Noir but decided their native California was probably not the best place in which to make it. Instead, they headed to Oregon where the cooler climate offered the possibility of producing Pinot Noir with better balance and structure.
After countless months of looking at possible properties, Carol and Steve discovered an old sheep ranch called "Sunnymount" in the southern Willamette Valley. It was immediately apparent Sunnymount held great potential as a vineyard site. The property is in the foothills of the costal mountain range on the west side of the valley with hillsides sloping east by southeast, a perfect orientation for planting Pinot Noir.
Sunnymount straddled the border between Benton and Lane counties with some of the land being in each, and so the name Benton-Lane was born. Carol and Steve purchased the property in 1988 and planting of Pinot Noir commenced in 1989. Benton-Lanes first vintage was 1992 which was custom produced at another local winery. This process continued until 1997 when the Benton-Lane winery was constructed.
Benton-Lane produced Pinot Noir exclusively until 2003. In 2004, the winery began full-scale commercial production of Pinot Gris from grapes purchased from carefully selected Willamette Valley growers.-Winery Notes

View all from Benton Lane Winery 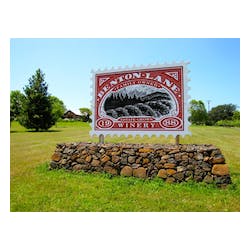 Benton-Lane Winery was founded by lifelong winemakers Steve and Carol Girard. It was silky, spicy Oregon Pinot that convinced them to move from Napa Valley to the tenderloin of The Willamette Valley where they planted their sustainably grown vines in a historic sheep ranch. In addition to their sinfully sexy Pinot Noir, they produce a fruity, crisp Pinot Gris, a deep, aromatic Pinot Blanc and rich, velvety Chardonnay.

"Delicious! 2014 was a stellar year for Oregon pinots"