If wine was a pizza, this would be it! Savory herbs, tomato paste, olive tapenade, pepperoni, and grilled meats all make for a heady and delicious aromatic perfume. Richly textured and structured, this young wine has so  ... read more

If wine was a pizza, this would be it! Savory herbs, tomato paste, olive tapenade, pepperoni, and grilled meats all make for a heady and delicious aromatic perfume. Richly textured and structured, this young wine has so much umami and savory expression with a distinct sweet fruit concentration of grilled plum, fig, and fresh blackberry. This is a big wine inside an elegant frame that promises years of drinking pleasure. Drink Now 2028+. Alcohol: 13.0%

If the chance to purchase small batch, hand-crafted wines from a small, artisan family producer who you trust to make delicious wines that over deliver on value isnt enough.let me add in this very important part of our Syrah story.

The labels for gargantua and pantagruel were painted for us by my very good friend Nat Meade. We grew up together in Northwest Portland, attending the same grade, middle, and high schools. He is a renowned visual artist who now lives in Brooklyn, NY and I have long been an admirer of his work.

Nats oldest son was born with Angelman Syndrome, a genetic disorder that affects the nervous system of children. Currently, there is no cure for AS. Nats family has joined a coalition and created a foundation called Quincys Quest that is dedicated to finding a cure for this disease. Bergstrm Wines has dedicated an annual donation, derived from all Syrah sales. With every bottle of gargantua or pantagruel Syrah that you purchase, you are making a contribution to this important research, and giving hope to so many families across America who are affected by this syndrome.
About Bergstrom Wines
THE BERGSTRöM STORY

When John and Karen Bergström began Bergström Wines, they wanted to start a business that would become a legacy for their children and pay tribute to John's agricultural Swedish upbringing. With these dreams in mind, the couple moved from Portland to Dundee, where they planted the Bergström Vineyard on a gentle, 13-acre, south-facing slope overlooking the wide expanses of the Willamette Valley. In 1999, Josh Bergström, the fourth of five children, returned home to Dundee from a postgraduate program in Viticulture and Enology in the Burgundy region of France. With him, he brought his fiancée Caroline, and the two were married that fall in the Bergström Vineyard. Bergström Wines was also born that fall as the young couple harvested their first vintage of Pinot Noir from high-quality fruit purchased at a neighboring winery. Currently, Josh is general manager, winemaker and vineyard manager at Bergström Wines, and Caroline manages the sales team.

Our family business traces its roots to our father John Bergström's Swedish heritage and the love he developed for the Pacific Northwest. John grew up in a small agricultural and logging village in northern Sweden. As a young teenager, he set out by himself for Oregon, eager to follow the American dream of creating a life better than the one he knew as a child. Ultimately, he became a surgeon, created a successful medical practice and raised five children in his new homeland. After many years, John decided to return to his agricultural roots and pursue his dream of winegrowing, eventually founding Bergström Winery. Today, John and Karen Bergström are proud parents who have helped establish a flourishing business and who enjoy traveling the world sharing Bergström Wines and its vision with fellow wine enthusiasts.

Bergström Wines consists of five estate vineyards totaling 84 acres that span across four of the Willamette Valley's best appellations: The Bergström Vineyard, Silice Vineyard, Winery Block, Gregory Ranch and Le Pré du Col. Each estate vineyard is farmed without the use of harsh chemicals, systemic or fertilizers, and the winery produces approximately 10,000 cases of ultra-premium and extremely sought-after wine each year, including two Chardonnays and nine different Pinot Noirs.

Bergström Wines believes that the greatest source of new world Pinot Noirs and Chardonnays is Oregon's Willamette Valley. It is from this cool climate promised land that true terroir and classic, noble varietal expression can be found through careful stewarding of vineyards and wines. We believe in attention to detail, respect for the land and products of purity that pair with local fresh foods and can age and develop for years in the cellar.
View all Bergstrom Wines 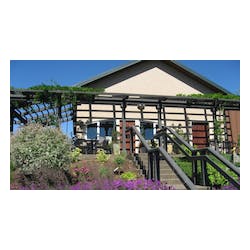