View Cart / Checkout
Loading... Loading cart
Total:
—
0
Cart
Delivery
Search
Menu
Home » Wine » Red Wine » Spanish Red » Bernabeleva Garnacha de Vina Bonita 2018
Sample Image Only
Bernabeleva Garnacha de Vina Bonita 2018
Wine Advocate 96+
"I believe the inherent elegance and balance of the vineyard helped to make the 2018 Garnacha de Via Bonita feel more harmonious after the incipient bottling compared to the rest of the single vineyards from 2018. The palate reveals very fine-grained tannins, focused and pure flavors and a long, lingering finish. This reminds me of the 2016, a more complete version of it, with the stuffing for a long life in bottle. I  ... read more

Item Sold Out
Winery: Bernabeleva
Category: Spanish Red
Size: 750mL (wine)
Closure: Cork
Item ID: #37770
Region: Spain » Vinos de Madrid
Other Similar Items
$41.95 WA 95
Bodega Muga Reserva 'Seleccion Especial' 2018
$35.95 TA 95
Cune 'Imperial' Rioja Reserva 2017
$24.95 JS 94
Bodegas Muga Reserva 'Unfiltered' 2018
$26.95 WA 94
Pingus PSI 2020
$35.95 WE 94
Protos Reserva Ribera del Duero 2015
$39.95 WA 94
Remelluri Rioja Reserva 2015
$32.95 WA 94
Torre de Ona 'Finca Martelo' Tempranillo 2015
$49.95 JS 94
Macan Rioja Clasico 2018
$32.95 JS 93
Beronia Gran Reserva 2012
$25.95 JS 93
Lopez de Heredia 'Cubillo' Crianza 2013
$28.95 VM 93
Bodegas Alto Moncayo Veraton 2018
$22.95 WS 92
Bodegas Lan 'Gran Reserva' Rioja 2015
Information
Questions
Size / Vintage Options
Reviews
Item Description
Wine Advocate 96+
"I believe the inherent elegance and balance of the vineyard helped to make the 2018 Garnacha de Via Bonita feel more harmonious after the incipient bottling compared to the rest of the single vineyards from 2018. The palate reveals very fine-grained tannins, focused and pure flavors and a long, lingering finish. This reminds me of the 2016, a more complete version of it, with the stuffing for a long life in bottle. I think this should be phenomenal with a couple of years of bottle aging. 2,000 bottles were filled in February 2020."~Luis Gutierrez
About Bernabeleva
"Here is another exciting winery from the Rare Wine Co. portfolio! Bodega Bernabeleva is an up-and-coming, tiny, new winery located on the far western edge of the Viños de Madrid DO, within the San Martín sub-zone. The estate resides in the small village of Pelayos de la Presa, next to San Martín de Valdeiglesias, a historic town after which the sub-appellation takes its name. The producers in this small zone are careful to include "San Martin de Valdeiglesias" on their labels, to indicate and differentiate the higher level of quality found here. A quick word about Viños de Madrid DO--Created in 1990, the DO is sandwiched between La Mancha and the Spanish capital, where it forms a semicircle around the southern suburbs of Madrid. It has three sub-zones located at the southernmost periphery of the DO: Navalcarnero, Arganda, and San Martín. While much of the wine produced within the Viños de Madrid DO is comparable to the mass production of La Mancha, within these three sub-zones there grows in strength a small group of dedicated, quality-conscious producers that are slowly building a name for themselves. Bodega Bernabeleva is one of them.

The first thing worth mentioning about Bernabeleva is that this estate is practicing organic and biodynamic. They ferment their wines in large, upright old wood fermentors with long macerations and use indigenous yeasts. Their vineyards are comprised of sandy soils (decomposed granite), at elevations of 550 to over 1,000 meters. Many of their vines are over 80 years old, with a minimum vine age of 30 years. The location of their vineyards and their altitude result in wide diurnal temperature shifts, allowing for ripeness with great balance. The winemaker is a Catalan man named Marc Isart Pinos who is passionately focused on transforming the project to 100% biodynamics. Their wine rarely leaves the Madrid area, typically disappearing immediately into the city's numerous wine bars, restaurants, and of course, people's homes. Given the mere pittance of 3,300 total cases produced of Camino de Navaherreros (and a much smaller US allocation), we are truly lucky to receive this rare gem!"
View all Bernabeleva 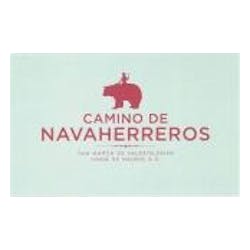