International Wine Cellar 97
"One of the world's great wine values... Very rich, almost painfully intense wine pungent freshness and great subtlety. Incredibly long aftertaste features a hint of almond skin, an intense fruitiness and the tang of the sea." Perhaps the PERFECT APERTIF."
About Bodegas Hidalgo
In the second half of 1800's. XIX the Hidalgo family begins the winery activity starting from soleras of wine and vineyards of his property.

At the beginning of the XXth century D. Emilio Hidalgo y Hidalgo already has a secured business, delegation in London and presence in many countries.

From 1970, already incorporated, it develops a very important export activity in the markets of England, Holland, Germany and Austria, as well as in the USA, Japan, Denmark, Italy, France and Belgium.

Nowadays, extraordinary pieces of wine and brandy are preserved that have been continued, increased and enriched, being the fifth generation of the founding family the one that dedicates itself to the work of the winery.
View all Bodegas Hidalgo 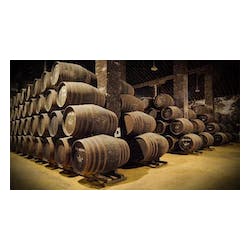 No questions posted yet about this item.
One of the best of the larger houses
"Very dry yet full taste, great QPR"
Posted byMaarten on Nov 25, 2013Verified Purchase
Oak anyone?
"Very powerful oak!"
Posted byJohn on May 13, 2012Verified Purchase
Subscribe to our newsletter!