Ship "12" Free when you mix or match a 12 bottle case! more...
Bodegas La Cana 'Old Vine' Albarino 2018 ships free when purchased by the 12 bottle case! — Fill a 12 bottle case with this item or any of our other 400+ eligible free shipping items and that case ships for free! Note that there is no limit to the number of cases you can have shipped for free so long as they are filled with eligible "Ship 12 Free" items.
James Suckling 92
Pineapple, lemon meringue, grapefruit and cloves. Medium-bodied and very tangy. Loads of apricot and citrus character. Drink now. July 26, 2019

Denominacion de Origen: D.O. Rias Baixas
Location: Town of Zamar, Villa García de Arousa, Valley of Salnes, D.O. Rias Baixas
Varietal: 100% Albariño
Vineyards: Finca Do Zar and San Clemezo (Salnés)
Year(s) Planted: Do Zar: 1970; San Clemenzo: 1984
Viticulture: Traditional dry farmed viticulture. Planted in the pergola system. Cultivated completely by hand.
Soils: Very acidic sandy soils originating from the granite mother rock.
Climate: Atlantic climate. Very humid for the majority of the year with warm summers. Influenced by the gulf stream.
Winemaking: Hand-harvested and stored in small baskets. 25% fermentation by indigenous yeast in French oak puncheons and demi-muids (500-600 L. barrels, respectively). 75% fermentation in stainless steel tanks.
Ageing: 8 months sur lie in the fermentation vessel. 25% in puncheons and demi-muids and 75% in stainless steel, with battonage.
Comments: La Caña is a wine that Jorge Ordóñez and his winemaking team craft to demonstrate the potential that Albariño shows as a high quality, serious wine. As Jorge was the first person to export this variety, he has a tremendous passion and appreciation for Albariño, and as a result, feels the variety should be used to produce serious wines. La Caña demonstrates the complexity, intensity, and longevity Albariño can achieve when sourced from old vineyards and using serious winemaking practices.

View all from Bodegas La Cana 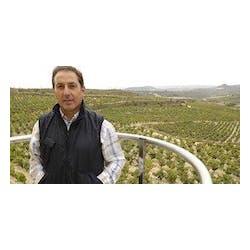 A cool new wine from the Jorge Ordonez Portfolio. A wine of this quality and magnitude can only come from carefully tended old gnarled vines grown under adverse conditions.