Ship "12" Free when you mix or match a 12 bottle case! more...
Bodegas Monteviejo 'Festivo' Malbec 2021 ships free when purchased by the 12 bottle case! — Fill a 12 bottle case with this item or any of our other 400+ eligible free shipping items and that case ships for free! Note that there is no limit to the number of cases you can have shipped for free so long as they are filled with eligible "Ship 12 Free" items.
James Suckling 93
A medium-bodied red with plum, black-cherry and some chocolate character. Fine, creamy tannins and a flavorful finish. Drink or hold.~J.S.

James Suckling 93
A medium-bodied red with plum, black-cherry and some chocolate character. Fine, creamy tannins and a flavorful finish. Drink or hold.~J.S.

View all from Bodega Monteviejo 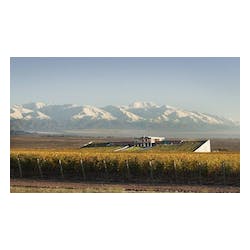 MARCELO, EXPERIENCE AND ITS WORK

Today, Marcelo Pelleriti is a global reference in the enology industry, and the family's general manager and enologist. Marcelo developed his professional career in France and Argentina, establishing himself as a great interpreter of the terroir.

Guided by his wise master, Michel Rolland, Marcelo forged his own path by making wines that are recognized worldwide.

For more than 15 years, he has been in charge of harvests in Bordeaux at the Chateau La Violette, Chateau Le Gay and Chateau Montviel (properties also owned by the Parent family). Since 2001, each year he has resided in France from September to November.

Marcelo's extensive experience resulted in him becoming the first Latin-American winemaker to obtain 100 Robert Parker points for a French wine. He has also received high scores on Argentinian wines. A true music lover, Marcelo plays guitar when he's not at work during harvest season. In 2011, alongside his friend and musician Rano Sarbach, he created the rock festival Wine Rock.

"Very true to Malbec in style and character. Pleasing amount of fruit leaning toward cherry / black raspberry and with a slight nuttiness that provides for a nice, round, drinkable and complex wine. A terrific bargain"

"Not my favorite, but very nice any time."

"Very good for the price."