Viticulture: Traditional Riojan viticulture that is completely sustainable and organic, although not certified. A blend of head trained and trellished vineyards of Rioja's most traditional white varieties.

Viticulture: Traditional Riojan viticulture that is completely sustainable and organic, although not certified. A blend of head trained and trellished vineyards of Rioja's most traditional white varieties.

Winemaking: Eight hour maceration in pneumatic press, followed by fermentation in mostly neutral barriques, puncheons, and demi-muids. The barrels used for Muga Blanco are all coopered from French oak trees that are selected by the winemakers yearly in February. The staves are seasoned for a minimum of three years, and up to five.

Comments: A traditional barrel fermented white wine from Rioja, produced with a blend of the most important indigenous white varieties of the region. The wine is composed practically of all Viura and Malvasa, but there is a tiny quantity of Garnacha Blanca which adds complexity and aromatics. Typical and traditional in its blend and production, but unique in its higher levels of freshness and approachability at a young age compared to other whites from Rioja.

View all from Bodegas Muga 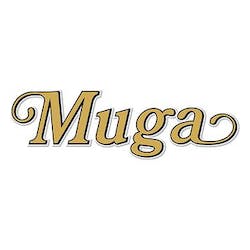 Wines that are born from inspiration and authenticity.
In Muga, we always use the finest materials and are open to new techniques that provide greater quality without losing authenticity.
To produce each of our wines, we continue opting for traditional procedures:
Through the natural process of fining, we eliminate the suspended particles that appear in the wine.
We carry out the decanting by the traditional method of gravity.
We are the only cellar in Spain with a master cooper and three in-house barrel-makers.

"If you're looking for an inexpensive white other than pinot grigio, give this a try. It's easy and very pleasant."