4 of 5 (1 review)
Item Sold Out
Notify me when this item is available
While this item isn't currently available:
Wine Advocate 92
The 2017 La Montesa is mostly Garnacha with some 8 other red varieties and comes from a warm and dry year that saw a very early harvest, up to 20 days earlier than usual. It fermented in stainless steel and matured in barrique for 12 months. It feels very Mediterranean, with notes of Mediterranean herbs and ripe berries. It's juicy and lush, round and very pleasant, easy to drink. 670,000 bottles produced and ... read more

Wine Advocate 92
The 2017 La Montesa is mostly Garnacha with some 8 other red varieties and comes from a warm and dry year that saw a very early harvest, up to 20 days earlier than usual. It fermented in stainless steel and matured in barrique for 12 months. It feels very Mediterranean, with notes of Mediterranean herbs and ripe berries. It's juicy and lush, round and very pleasant, easy to drink. 670,000 bottles produced and will be labeled organic, very remarkable for such volume. It was bottled in May 2019.

Tim Atkin 94
“One of Álavaro Palacios' great achievements is to make wines of this quality in comparatively large (656,000 bottles) quantities. This blend of Garnacha with 2.8% Monastell is elegant, refined and stylishly oaked with pure red fruits, rose petal undertones and the racy acidity of the best mountain Garnachas.” Drink 2020-26

Tasting notes
Named after a hillside vineyard located on the northeastern slope of the Yerga mountain in eastern Rioja, La Montesa is a blend of the indigenous grape varieties that grow on the Palacios Remondo estate. Juicy and lush, with notes of cherry, raspberry and orange peel that meld with Mediterranean herbal undertones to create a wine that is balanced, bright and lively. Aged 12 month in barrel and bottled unfiltered. 95 Garnacha & 5 Other red grapes

Estate
If anyone embodies the promise and spirit of The New Spain, it is winemaker Alvaro Palacios. Born into a wine family in Rioja, he now makes wine in three different appellations: Priorat, Bierzo, and his hometown of Alfaro in Rioja. Alvaros flagship Priorat wine, LErmita, is one of the most coveted wines in all of Spain. Following his great successes in Priorat and Bierzo during the 1990s, and the death of his father in 2000, Alvaro Palacios took the helm of Palacios Remondo, his familys property and winery in Rioja Baja.

Vineyard
Located at an altitude of 1,800 feet, Palacios Remondos vineyards are grown at some of the highest points in Rioja. The 30-year-old head-trained vines are hand-harvested, grown organically, and very narrowly spaced (3,000 plants per hectare). Soil is comprised of sediments that stem from the Quaternary Era, consisting of clay and a stony-calcareous subsoil, covered in stones, with excellent drainage. Very low in organic material and with a moderated basic pH, the soil is perfect for growing high quality fruit. By dry-farming and dropping close to 40 of their fruit, Palacios Remondo ensures only the highest quality fruit is picked during harvest.

History
The Palacios Remondo winery history stretches back five generations when the D.O.C. Rioja was first gaining notoriety as one of the premier winemaking regions of the world. Jos Palacios Remondo, father of renowned winemaker Alvaro Palacios, reestablished the estate in 1945. Alvaro Palacios, born at his familys winery in Alfaro, became one of Spains winemaking pioneers for his successes in Priorat and Bierzo and was recently voted Decanter Magazines Man of the Year (March, 2015). In 2000, upon his fathers death, Alvaro assumed responsibility for Palacios Remondo, and committed to taking the estates quality to new heights. Under his inspired leadership, Palacios Remondo is now a rising star of Rioja.

Vintage
As in recent years, the late arrival of the seasons meant a delayed but intense winter in our vineyard on the foothills of the Yerga mountains. The ongoing frosts, the unusually abundant rainfall, and the persistent snow on the highest elevations of the Sistema Ibrico mountains set the trend for the winter season right until the arrival of spring, when high temperatures brought budding forward - 25 days earlier than in the previous vintage. Fortunately, our vineyards escaped the intensely severe frosts on April 27 and 28 that affected virtually all of Europes most important wine regions to a greater or lesser extent. In the easternmost part of Rioja, higher than average temperatures brought flowering forward (to May 20 in La Montesa) with no problems in terms of fruit setting. During the first half of the summer, sequential rainfall fed our soils with the right amount of water for the vines to develop perfectly. Water stress was in perfect balance until August: the 39 litres of rain registered that month were not absorbed by the plant as the downpour came in the form of a storm. The first symptoms of stress were noticeable. Coupled with the high temperatures on the second half of August and early September, plants were forced to retain some water from the bunches in order to survive. The first estimates indicated a 15 drop in yields with regards to the entire harvest. The early vintage brought the harvest date forward to the earliest in 20 years. On September 8, around 20 days earlier than the usual date, we started to pick grapes. Under such uncertain circumstances, we proceeded with caution. The warm summery weather during the daytime was followed by a severe drop in temperatures at night time until October 12, when we finished grape harvesting on the higher parts of the estate. As plants were suffering from water stress at the end of the summer, sap stopped flowing so sugar levels were kept under check. Although acidity was slightly lower, the cooler nights traced between the strong skin and the dense pulp of the berries, a master template plot that contains and shows the great wealth of this vintage grenache. The sensation of firmness is amazing and the wine appears savory, clean and exquisitely harmonious. It is the expression of an unique vintage bathed by sunlight.

View all from Bodegas Palacios Remondo 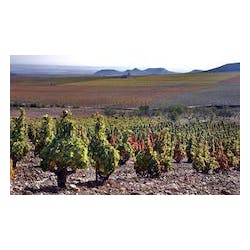 Founded in 1945, it has been the seed of a wine producing dynasty which has expanded beyond the Rioja confines. Álvaro is based in Priorat and in Bierzo with nephew Ricardo Pérez whereas Rafael Palacios is making white wines in Valdeorras.

Palacios Remondo has always been among the leading producers in the often snubbed Rioja Baja, traditionally associated with mass produded wines rather than quality brands. It is therefore understandable that Álvaro Palacios tried for a while to popularise the less derogatory name of Rioja Oriental. Regardless of his long absence, the shadow of Spain's celebrity winemaker has always hanged over the family winery and he is now in charge of both the business and the wines.

His vision of this part of Rioja could be summarised in two words: Garnacha and altitude. The jewel of the winery is the fabulous La Montesa vineyard, which rises on the hillsides of Monte Yerga. When Garnacha, Rioja Baja's natural variety, is planted on this location and at the right orientation, it can give wines that stand out among others in the Denomination for their freshness, aromatic nose and balsamic power. As an expert in the variety thanks to his work in Priorat, he has increased the presence of Garnacha in the house bottlings. It now represents 75% of the blend in La Montesa (€11) whereas the premium Propiedad Viñedos Tradicionales (€21) is a single varietal.

Empire customer on May 3, 2021  [Verified Purchase]
Scroll to the top of this page