Item Sold Out
Notify me when this item is available
"Each year, Brander Vineyards produces a limited amount of Chardonnay that is vinified in a style reminiscent of many of our Sauvignon Blancs: fruit-forward, blocked malolactic fermentation and no fermentation or maturation in oak." ~ Winery notes
Item ID: #2209
Winery: Brander Vineyards
Category: Sauvignon Blanc
Size: 750mL (wine)
Closure: Cork
Other vintages
Share this item on FacebookFollow Empire Wine on TwitterFollow Empire Wine on Pinterest

"Each year, Brander Vineyards produces a limited amount of Chardonnay that is vinified in a style reminiscent of many of our Sauvignon Blancs: fruit-forward, blocked malolactic fermentation and no fermentation or maturation in oak." ~ Winery notes

View all from Brander Vineyards 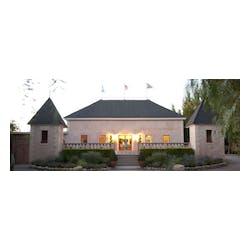 The history of the Brander family in the New World starts with Fred's grandfather, Fritz Brander, who emigrated from Sweden to Argentina in the early 1900's. Fritz completed his studies in economics at the prestigious Handelshogskolan School of Economics in Stockholm, Sweden. His academic accomplishments were recognized by the King of Sweden, who granted him a three-year, expense paid, business scholarship.

Fritz traveled to England for the first year of his post-graduate studies to learn the textile business, then chose France for his second year, where he apprenticed in the wine trade. For his third and final year, he ventured to more distant lands, where he learned the agricultural export business in Buenos Aires, Argentina.

One would think that having finished his post-graduate studies, Fritz would have chosen to follow the wine business in Europe. Instead he set his eyes on returning to Argentina to take advantage of the thriving economy there. With the help of the famed Wallenberg banking family of Sweden, Fritz was able to start an import-export business. During his first years in Argentina, the business prospered by exporting wheat grown in the Pampas to Sweden and other parts of Europe. For the return trip to Argentina, the same ships were loaded with cobblestones mined in Sweden. These cobblestones were then used to pave the many beautiful avenues that one still sees in downtown Buenos Aires.

In 1926, Fritz Brander expanded his import export business, and named it Brander & Co. In addition to representing several industrial Swedish brands, such as Volvo and Saab, he built the first dealership for the Caterpillar tractor company in Argentina. As one of the leaders of the Swedish colony in Buenos Aires, Fritz was appointed Swedish Consul General in the 1940's by the King of Sweden.

Fred's father, Erik, who was born in Buenos Aires but did all of his schooling in Sweden, went on to manage the family business. It was during one of his business trips to the USA that he met Fred's mother, Virginia, and they returned to Argentina to start a family. In 1962, after a long period of political upheaval and economic duress, they decided to move with their two children to Santa Barbara, California.

Erik Brander was a man who possessed many talents, most particularly with his paint brushes and canvas. Erik's other passion came by chance and was sparked by his son's suggestion to purchase a plot of land in Los Olivos. In 1975 the first vines were planted, and over the next three decades Erik was the shepherd of the vines. Karl Erik Brander passed away in the spring of 2010, and he will fondly be remembered for his ingenious wit and by the various paintings that adorn the walls of the tasting room.

Fred's innate enthusiasm for chemistry was recognized by his family, and before entering high school he received his first chemistry set. Fortunately, the family home was never burned down, and his reverence for science went with him when he pursued his college degrees. With such an international background, and with an added interest in art and culture, he spent his summer vacations travelling through Europe, where he fell in love with the culture of food and wine.

His facility with languages afforded him the opportunity to pursue studies on three continents: the University of Buenos Aires in Argentina, the University of Uppsala in Sweden, the University of Dijon in France, Harvey Mudd College for chemistry, and finally UC Davis in California. He is currently a candidate in the Master of Wine program administered from London, and his research on flavor chemistry in wines was published in the American Journal of Enology and Viticulture, which helped him earn his Master of Food Science degree from U.C. Davis.

While completing his enology studies in the early 1970s, Fred began his wine career working at a Santa Barbara wine merchant. During this period, he launched his own wholesale and import wine business, bringing wines from France and his native Argentina into the US. Longing to make his own wines, Fred and his father purchased a 40-acre property in Los Olivos. In 1975, the first vines were planted, mainly to Bordeaux grapes. His first Sauvignon Blanc harvest in 1977 won Santa Barbara County's first gold medal at a major wine competition. To complete his vision and dream, Fred began construction of his winery in 1979. The three flags that waive proudly over the chateau and tasting room make reference to his family roots: Sweden, Argentina, and the US.

Fred Brander's pursuit to produce the best Sauvignon Blanc in California is documented in various publications and by the numerous awards that his Sauvignon Blancs have received. He has recently put the same effort, dedication and fanatical fervor into creating exceptional small lots of estate Cabernet Sauvignon that push the quality envelope for red Bordeaux varietal wines produced in Santa Barbara County.

Fred embraces his multicultural upbringing by traveling back to his native Argentina and frequently flying to Europe. He enjoys expanding his cultural background by collecting Latin American art with an emphasis on museum-quality Mexican ceramics. He has earned his place in the wine world, as he is often called the "King of Sauvignon Blanc" in California.