After the parade the caravan returned to Bully Hill to celebrate. They all believed that Walter had won. Walter who did not share their sentiments believed that he had been ruined forever. How was he supposed to make honest wine and run a company founded on honesty when he couldn't tell people who he truly was? Walter, who normally never missed a day of life at Bully Hill, disappeared. As several days passed the staff at Bully Hill began to worry. They decided to go search for Walter and make sure he was okay. As they approached his office which sat in an old white barn at the Bully Hill farm they heard a scream. Alarmed and concerned they rushed up to the office door to find Walter dancing around his office exclaiming, "That's it! That's it! They didn't get our goat! They didn't get our goat!" Several days later Walter emerged from the old white barn with a new catch phrase and a brand new label for a "Goat White Wine." Greeted by curious employees to see what he had been up to, Walter held up the new label and exclaimed, "They have our name and heritage, but they didn't get our goat!"?
View all Bully Hill 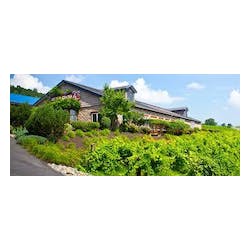