Vinous 94
"The 2011 Brunello di Montalcino is dark, pliant and beautifully expressive. Black cherry, plum, lavender and spice notes make a strong first impression. The 2011 presents a noticeably dark palette of aromas and flavors, yet the structure is very much medium in weight and overall body. Soft contours give the 2011 much of its early accessibility. This is a strong wine for the year, and a Brunello with the potential to drink well for the better part of the next decade." 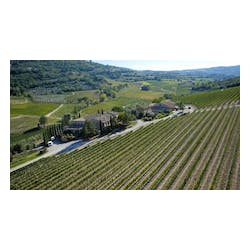