View Cart / Checkout
Loading... Loading cart
Total:
—
0
Cart
Delivery
Search
Menu
Home » Wine » Red Wine » Other Red Wines » Casa Santos Lima Confidencial Reserva 2018
19%
OFF Sample Image Only
Casa Santos Lima Confidencial Reserva 2018
$11.11 $8.95
Ship "12" Free when you mix or match a 12 bottle case! more...
Casa Santos Lima Confidencial Reserva 2018 ships free when purchased by the 12 bottle case! — Fill a 12 bottle case with this item or any of our other eligible free shipping items, and that case ships for free! Note that there is no limit to the number of cases you can have shipped for free so long as they are filled with eligible "Ship 12 Free" items.
Wine Enthusiast 90
"Wood aged, ripe and with layers of attractive black fruits, the wine is full, generous and with a fine mature balance. It is a blend of 10 grapes, with six months in wood. Drink the wine now."

"This wine shows great diversity of complex aromas, such as red fruits and vanilla. Medium body in the mouth, it reveals again sensations of red fruit, harmoniously integrated with wood notes and fine tannins provided by ageing  ... read more

"This wine shows great diversity of complex aromas, such as red fruits and vanilla. Medium body in the mouth, it reveals again sensations of red fruit, harmoniously integrated with wood notes and fine tannins provided by ageing in 250 litres oak barriques. In the aftertaste, develops smooth and rich flavours, some acidity and complexity, overcoming ripe fruit, chocolate and wood notes. Its dryness and persistence, combined with its fine elegant tannins, put in evidence its great gastronomic and evolution potencial. A wine to keep." ~Winery Notes
About Casa Santos Lima
Casa Santos Lima is a family owned company dedicated to the production, bottling and selling of Portuguese wines. The company is present directly or indirectly in the regions of Lisboa, Algarve and Alentejo, Vinho Verde and Douro. This way and from around 400 hectares of vineyards, it produces wines known for their excellent quality/price ratio and exports around 90% of its total production to close to 50 countries in all 5 continents. Casa Santos Lima is also the largest producer of "Vinho Regional Lisboa" and "DOC Alenquer" and in the past years has been one of the most awarded Portuguese wineries in major national and international wine competitions.

Also in this region, another wine producing company, the "Sociedade Agrícola Quinta do Conde S.A" (www.saquintadoconde.com) is under the company's management.
View all Casa Santos Lima 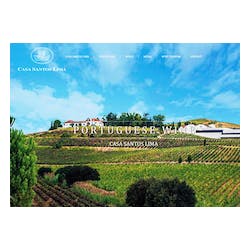