store shelf
James Suckling js 90
Winery: Casal Garcia
Category: Other White Wines
Size: 750mL (wine)
Alcohol by vol: 9.5%
Closure: Screw Cap
Item ID: #2485
Location at store: 107a
Region: Portugal
Other Similar Items
$8.95
Maria Papoila Vinho Verde 2021
$9.95
Tons de Duorum White 2020
$9.95
Yalumba Y Series Viognier 2021
$7.95
Broadbent Vinho Verde 'Sunflower' NV
$6.95
Gazela Vinho Verde NV
$9.95
Forstreiter Grooner Gruner Veltliner 2021
$9.95
Domaine Duffour Blanc Colombard 2021
$6.95
Fetzer 'Monterey' Gewurztraminer 2020
$8.95
Chateau Ste Michelle Gewurztraminer 2021
$6.95
Toucas Vinho Verde 2020
$9.95
Dr. Loosen 'Villa Wolf' Gewurztraminer 2021
$9.95
Aveleda Loureiro Alvarinho Vinho Verde 2019
Information
Questions
Size / Vintage Options
Reviews
Item Description
James Suckling 90
"Very typical Vinho Verde with the green-wine character of tangy and energetic acidity and lots of citrusy fruit. Light and nice. Serve very cold! Drink now."
About Casal Garcia
HOW IT ALL BEGAN
Casal Garcia was born in 1939, a year in which the vintage was particularly good. Returning by train from the grape harvest in the Douro, the French oenologist Eugène Hélisse decided to interrupt his journey to Oporto after passing the vines of the Quinta da Aveleda, in Penafiel. Dressed in white, and with a straw hat to ward off the heat of the end of summer, he began to walk towards the property's cellar. He went in, introduced himself and insisted on speaking to the owner, Roberto Guedes. What he had seen minutes before from the window of the train was truly special: the vines were beautifully cared for and the land was divided according to grape variety, everything in French style. This was not a usual procedure in the Vinho Verde region. After a long conversation, Roberto Guedes decided to contract the services of the French oenologist, who had promised him significant improvements in the method of winemaking. The results became evident at the end of the harvest, when Eugène Hélisse took a sample from a wooden barrel and placed it in an old glass bottle. The wine had a beautiful, transparent colour and such a freshness that everyone present was thrilled. Thus, in order to enhance the wine's appearance, he passed a lace handkerchief over the bottle to clean the dust. And there the lace remained!

The name came about by itself, since the wine was produced from one of the vines of Aveleda: that of Casal Garcia.
View all Casal Garcia 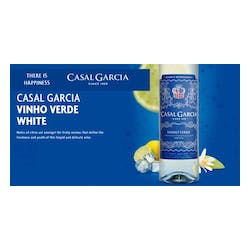