$12.95
Vinous Media 90
"From year to year, the Il Ros di Casanova continues to impress, and the 2020 is no different. Here Im finding a contrasting blend of spiced citrus and tart apples offset by wild herbs and crushed stone. Its silky in feel yet lifted and spry, casting ripe orchard fruits and inner herbal tones across a wave of vibrant acidity. A lingering note of salinity and hints of lemon peel keep tension high throughout ... read more

Vinous Media 90
"From year to year, the Il Ros di Casanova continues to impress, and the 2020 is no different. Here Im finding a contrasting blend of spiced citrus and tart apples offset by wild herbs and crushed stone. Its silky in feel yet lifted and spry, casting ripe orchard fruits and inner herbal tones across a wave of vibrant acidity. A lingering note of salinity and hints of lemon peel keep tension high throughout the mouthwatering finale. This is an equal-parts blend of Sangiovese and Prugnolo Gentile. - Eric Guido"

The Wine
Giorgio Rivetti, the man who never sleeps, is at it again! His quest to make great wine has taken him from Piedmont to Tuscany, into the world of sparkling wines and aperitivos, and ROSATO.

The 2019 Il Rose is a blend of equal parts Sangiovese and Prugnolo Gentile. The six hectare vineyard sits at about 300 meters above sea level and enjoys southern exposure. Bursts of red fruit and citrus makes this a summer sipper best paired with food or conversation.

The Estate
Giorgio Rivetti produces approachable yet age-worthy wines that capture the attention of wine critics and consumers year-in and year-out with their lushness, concentration, aromatics, and length. From his recently-acquired Tuscan estate, Casanova della Spinetta, located in the hills south of Pisa in the heart of Tuscany, come two cru Sangiovese wines from 40+-year-old vines. Both are 95 Sangiovese with 5 Colorino aged one year in French-oak barrels.

Furthermore, never let it be said that the greatness of La Spinetta is unavailable to the average consumerits actually quite the opposite! Giorgios entry-level value wines are some of his best and his Nero di Casanova, the young-vines blend of Sangiovese with a bit of Colorino is a great way to experience the success of La Spinettas move into Tuscany. 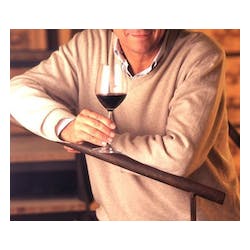