Introduction
The Chianti Classico label features the Commenda di Sant’Eufrosino, the second of four churches built within the city’s walls. Attributed to Italian architect and sculptor Michelozzo di Bartolomeo (1396-1472), the church was built in 1443 by request of the Canigiani family who lived in Volpaia. One of the family members wished to join the Knights of Malta, a religious order and military brotherhood ruled by a Grand Master that answered only to the Pope. The Knights of Malta required that the Canigianis build a church in Volpaia before joining the religious order. The Commenda was deconsecrated in 1932 and declared a national monument in 1981. For 13 years, until 1993, the Commenda housed a renowned art collection. The Commenda is now used for dinners, tastings and other events and its basement contains one of Volpaia’s barrel-aging cellars.

Vintage Report
The 2020 vintage began with a relatively warm winter and spring that resulted in the vines budding and flowering early. Temperatures only dropped in the first 3 weeks of June only to rise again immediately and remain high throughout the summer, although they never reached peaks highs for long periods.

We had a particularly dry winter, but it rained abundantly in May and the first half of June. Rain stopped almost completely over the summer, only to start again towards the end of August and during the harvest. We can say therefore that summer was generally hot and dry and the vines only underwent moderate water stress. Harvest took place about a week earlier than is usual in recent years. When harvested, the grapes were perfectly healthy with thick skins and ripe seeds, even the ones harvested last when rain had begun again.

The 2020 vintage has produced Volpaia wines that are a bright color and have a good acidity level without an excessive alcohol content. Compared to previous years they seem less concentrated but are more elegant.

Tasting Notes
The Chianti Classico has a vivid ruby color and a strong nose of fresh red fruit with hints of cherry. This is a well-structured wine with a fruity finish.
About Castello di Volpaia
The hilltop village of Volpaia was built in the 11th century as a fortified village on the Florence-Siena border. Its medieval layout and buildings are still intact and part of the original outside walls and two of its six towers are still standing, making Volpaia one of the best-preserved walled villages of its period. Nine centuries after Volpaia was built, Raffaello Stianti purchased a portion of the estate in 1966 and when his adored his daughter, Giovannella, married Carlo Mascheroni in 1972 he presented them with the estate as a wedding gift. Today, the couple is joined by their two children, Nicolo and Federica, and the family is considered one of Italy's leaders in organic viticulture and farming. In 2008 the family unveiled its second organically farmed venture, Prelius, on Tuscany's gold coast.

Volpaia is committed to organic farming practices in all of its estate vineyards and complies with all of the organic viticulture legislation in the production of its wines.
View all Castello di Volpaia 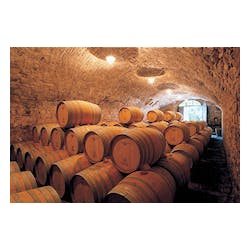 No questions posted yet about this item.
"Dont know if my bottle was faulty, but the aromas were baked and over ripe (not in a good way)."
Posted byDaniele on Dec 11, 2022Verified Purchase
Subscribe to our newsletter!