“A clean and intensely fresh wine that exhibits all the typical characteristics of the Albariño grape variety. Ripe and aromatic, with overtones of peach, melon and honey, offset by a crisp tangy acidity that helps to balance the rich fruit flavors. A well-rounded wine with a long, mellow, honeyed finish.“ ~winery notes 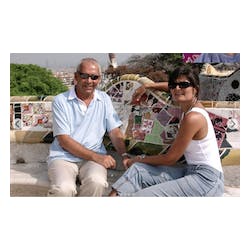 Northwest Spain is the greenest corner of the country. There, in what Spaniards know as Galicia, is the region's Rias Baixas D.O., which is pronounced "ree-as bi-shuss". The 9,900 acre-D.O. is highly fragmented with 6,500 registered growers who cultivate 23,000 delimited plots and whose fruit furnishes more than 150 wine producers. Vines are trained overhead using the pergola system.

Bodegas Castro Martin stands proudly as a Galician business still owned and managed by the original founding family; the estate pre-dates the D.O. creation. Acquired by Domingo Martin-Morales in 1981, the bodega is now managed by his daughter Angela Martin Serantes. With a degree in biology, and masters in oenology from Madrid University, Angela took over the day-to-day management of the Bodega in 1993, and now is its winemaker; she also serves on the Rias Baixas D.O. board.

The Castro Martin bodega was built in 1981, the first vintage being produced in 1982. It was the first bodega in the region to install stainless steel tanks. At that time their founder, Domingo Martin, was considered foolish for his extravagance (remembering that the denomination itself was not created until 1987). Don Domingo also had the foresight to construct the bodega on three levels meaning that grape juice and finished wine could simply be moved around the cellar using gravity.

Bodegas Castro Martin rigorously follows sustainable, environmentally friendly practices from their vineyards to the bodega. Sourcing fruit from varied parcels in the D.O., Castro Martin pays a premium for quality of grapes in a region still dominated by co-ops. In addition, to ensure quality, Castro Martin's grapes are picked parcel by parcel for optimal maturity, which is still not a common practice in the area.