Ship "12" Free when you mix or match a 12 bottle case! more...
Cataldi Madonna 'Giulia' Pecorino 2018 ships free when purchased by the 12 bottle case! — Fill a 12 bottle case with this item or any of our other 400+ eligible free shipping items and that case ships for free! Note that there is no limit to the number of cases you can have shipped for free so long as they are filled with eligible "Ship 12 Free" items.
Vinous Media 88
"Vivid straw-yellow. Clean and simple aromas and flavors of green apple, white peach and fresh herbs. Shows a building lemony and chalky bite that is nicely extended by lively acidity."~ID

"Pecorino wines are some of the best white wines from Abruzzo. Today, Pecorino is grown mainly in the March and Abruzzo regions, and the success of this grape varietal is to be credited to producers like Cataldi Madonna, among the first to rediscover this ... read more

"Pecorino wines are some of the best white wines from Abruzzo. Today, Pecorino is grown mainly in the March and Abruzzo regions, and the success of this grape varietal is to be credited to producers like Cataldi Madonna, among the first to rediscover this old native varietal. Due to its low productivity, Pecorino was almost abandoned in the twentieth century, replaced by more productive varieties. The professor and winemaker Luigi Cataldi Madonna was the first in Italy to label a wine as Pecorino in the 1990's. Due to its low productivity, Pecorino wines can be quite concentrated and high in alcohol. Recent winemaking advances, such as hyper-reductive techniques and the use of special yeasts, have created some Pecorino wines similar to Sauvignon Blanc in aromas and taste. Cataldi Madonna's Pecorino follows this trend. This wine takes the name of Luigi Cataldi's daughter, Giulia, who is the fourth generation to join the family business."

"Brilliant greenish yellow color. The bouquet on the nose is very elegant with aromas of white flowers, grapefruit, lime and fresh herbs. On the palate it is fresh and juicy, with a long lemony finish. Ideal on its own. pairs well with fish crudo, seafood and crustaceans."~Winery Notes

View all from Cataldi Madonna Malandrino 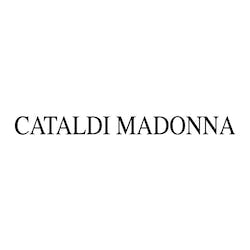 Founded in 1920, Cataldi Madonna has been carried forward by three generations of the family. Consisting of just over 65 acres, the estate is home to Abruzzo's native varietal range and has been bottling its own wines since 1975. Balance lies at the heart of Cataldi Madonna's vineyard and winery philosophy. The focus in the vineyard is to achieve equilibrium in the vine to best express the characteristics of the territory, rather than achieving a specific yield. The approach is continued in the winery, where all the techniques are oriented to preserve the grit, freshness, and distinct flavors of the grapes, as they naturally occur.Since 2003, Lorenzo Landi has consulted with Cataldi Madonna's winemaker Raffaele Orlandini, in order to achieve ever increasing levels of quality in the wines, showcasing the potential of Alto Tirino through its native varietals: Montepulciano d'Abruzzo, Trebbiano, and Pecorino. Located in the "oven of Abruzzo", Cataldi Madonna resides in Olena, a kind of amphitheater at the foot of the only Appenine glacier on Calderone in the Gran Sasso mountain range. Sitting at an elevation well over 1,000 feet, Cataldi Madonna's location is a unique intersection of natural gifts which cause significant fluctuation in day and night temperatures, critical to the development of the grapes.

"Wine is over the hill. Little or no fruit in the nose. A 2020 vintage might showcase the Pecorino grape better."