Cavit is a capital example of cooperation and size on a human scale. Trentino winemaking families are able to tap into a pool of resources and attain levels of quality that might otherwise lie beyond their reach.

Strength in numbers has also enabled Cavit to develop its own showcase hospitality and research center (which works closely with Italy's most prestigious school of viticultural research at nearby San Michele all'Adige), at the beautiful Maso Torresella, a former archbishop's castle on the shores of Lake Toblino.

The rewards of cooperation between Cavit's growers are apparent at every level, not least among consumers, for whom Cavit produces consistently high quality, affordably priced premium wines that have captured literally hundreds of awards and medals to date and are in demand in over 20 countries worldwide.
View all Cavit Collections 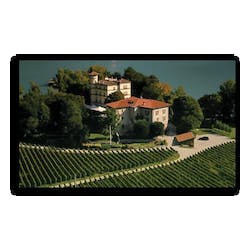 Shipping times would be dependent upon where we are shipping to. We can do custom labels that can be viewed at www.empirewine.com/weddinglabels but please keep in mind that they can take 6-8 weeks to come in

Julia, These do come in glass bottles. Please let me know if I can be of any further assistance.