Founded in 2002 by Juan Pelizzatti, a son of Italian immigrants with historic roots in northern Italy's viticulture, and under the guidance of Gabriel Bloise, a young and adventurous winemaker, Chakana has developed a wine style that has become known for its purity and authenticity.

When Chakana was founded on May 2, 2002, the Southern Cross (a constellation named Chakana by the indigenous people of the Andes highlands) reached a perfectly vertical position in the sky, marking the beginning of a new farming cycle. The Southern Cross holds the key to finding the perfect timing for the cultivation and harvesting of crops. It is a calendar, a compass, and a symbol of the link between earth and spirit. The choice of this name is an homage to the Inca understanding and respect for nature's forces.

Chakana wines are designed under the renowned international wine consultant Alberto Antonini. Alberto first came to Argentina in 1995, after key contributions to the Super-Tuscan movement in the italian winemaking landscape at Antinori and Frescobaldi. He immediately sensed the potential of Malbec and devoted most of his work in the following 15 years to the re-discovery and perfection of this now Argentine gem.

Starting from its 150 ha (371 acre) home vineyard in Agrelo, in 2011, Chakana expanded by acquiring two vineyards in Altamira, Valle de Uco and a 100 year-old Malbec vineyard in historic Mayor Drummond, Lujan de Cuyo. This has created a rich palette of soils and climates, which range from the calcareous soils and high altitude Altamira, through the loamy colluvial soils of Agrelo, to the warmer gravelly character of Mayor Drummond. The aim was to create wines that could naturally suit every preference while featuring the distinctive character of sunbathed Mendoza. In order to ensure the purest vineyard expression, and as a consequence of their reverence for nature's wisdom, Chakana has adopted organic and biodynamic viticulture practices since 2012. Vintage 2014 has been certified organic by IFOAM (International Federation of Organic Agriculture Movement).
View all Chakana Winery 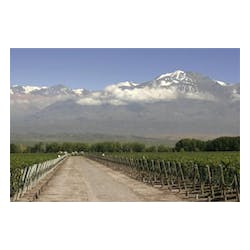