View Cart / Checkout
Loading... Loading cart
Total:
—
View Cart / Checkout
0
Cart
Delivery
Search
Menu
Home » Wine » Red Wine » Rhone Blend Red » Chapoutier & Yannick Alleno Cote du Rhone 2020
24%
OFF Sample Image Only
Chapoutier & Yannick Alleno Cote du Rhone 2020
$21.11 $15.95
Ship "12" Free when you mix or match a 12 bottle case! more...
Chapoutier & Yannick Alleno Cote du Rhone 2020 ships free when purchased by the 12 bottle case! — Fill a 12 bottle case with this item or any of our other eligible free shipping items, and that case ships for free! Note that there is no limit to the number of cases you can have shipped for free so long as they are filled with eligible "Ship 12 Free" items.
Powerful on the nose; aromas of red fruit, sweet spice and garrigue scents; medium to full-bodied wine with great power, fine tannins, great finish with licorice notes. Pair with rich poultry dishes.

True trailblazers in their field, each chef worked individually with M. Chapoutier to select vineyards and parcels from the prestigious appellations of Cornas, St. Joseph, St. Peray and Crozes-hermitage, with the mission and passion to produce world-class gastronomic wines.
About M. Chapoutier
No name is more closely associated with the greatness of the Rhone valley than M. Chapoutier.

A visionary and pioneer in biodynamic winemaking, his restless energy and unconditional commitment to quality have produced tremendous success, with the most 90+ point ratings of all Rhône producers and 16 "100 point" rated wines.
View all M. Chapoutier 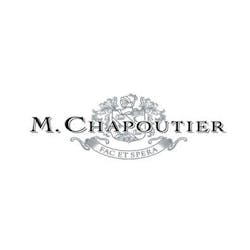