Vinous Media 91
"The NV Brut Cuve Ste.-Anne is, as always, a terrific introduction to Alexandre Chartogne's wines. Equal parts Pinot and Chardonnay, the Ste.-Anne offers lovely textural breadth and nuance. Almonds, honey, mint and dried pears open up nicely in the glass. Think of the Ste.-Anne like a village-level Burgundy from a top grower. Best of all, the Ste.-Anne is a terrific value in fine, artisan Champagne. The current release is equal parts Chardonnay and Pinot Noir based on 2012, with 20 each 2011 an 2010 reserve wines. Drink this forward, supple Champagne over the next few years. Dosage is 4 grams/liter. -- Antonio Galloni"

Robert Parker 90
"The NV Brut Cuvee St. Anne bristles with considerable energy for the year. It shows lovely balance in a fairly approachable style best suited to near-term drinking. The St. Anne is 60 Chardonnay and 40 Pinot Noir, based on the 2007 vintage with 20 reserve wines from 2006 and 2005. In 2007 Chartogne was not happy with his Meunier, so it was left out of the blend. Dosage is 4.5 grams per liter. Disgorged June 2011. Anticipated maturity: 2011-2015.

Alexandre Chartogne is one of Champagnes up and coming growers. Chartogne took over the family domaine in 2006. These wines were all made by Chartognes parents, although he naturally finished their elevage, including the disgorgements. Chartognes approach to viticulture and winemaking remains deeply influenced by the time he spent working under Anselme Selosse. Starting with 2007 there will be three Blanc de Blancs from separate single parcels in Merfy, a clear sign of the direction Chartogne is taking for the future. - Wine Advocate
(Nov 2011)"

Stephen Tanzer 90
"Light gold. Deeply pitched aromas of orchard fruits and redcurrant, with a hint of pungent herbs. Dense and chewy on the palate, offering broad pear and bitter cherry flavors braced by tangy acidity. Shows very good clarity and energy on the finish, which leaves a spicy note behind. - Tanzer (Jan/Feb 2012)"

"The blend here is 50 Pinot Noir and 50 Chardonnay and is 80 from the 2004 vintage and 20 from 2002. Chartognes have been producing Champagne for hundreds of years in the villages of Merfy, Chenay and Saint Thierry. Some malolactic fermentation is done on the Pinot Noir but not on the Chardonnay and there is 6 grams per liter residual sugar, which is about a third lower than it used to be. Alexander has taken over the winemaking here after completing his stage with Selosse. Total winery production is 6,700 cases.
Unusually pronounced red-grape fragrances this time; the wine is usually marked by sauteed apples and butter, but this time it's all braised beef, shiitakes and honey-mushroom; the palate starts to conform to type, silky and tangy and more apple now; as stylish and reliable as always. It's a very good intro to farmer-fizz; its flavors are close enough to the mainstream but very few negotiant Champagnes have this clarity, specificity and articulation.
With Chartogne-Taillet one appreciates the significance of terroir. Theirs is an example of just how wonderful wines can be simply because of how talented and conscientious they are. Their land, while good (Merfy is ?84- on the Echelle de Crus) is not aristocratic, and I'm certain if we could transplant them to, say, A? or Mesnil they'd promptly take their place among the elite. As it is, we have overachievers making some silky, swank fizz articulated with careful diction, "easy" drinking and forthright. These are racy, spicy Champagnes at the low end; sumptuous, brioche-y Champagnes at the top. For some reason, a consistent standout in blind tastings! The basic wine is keen and racy, and the upper-end wines are virtually luscious, they are so brioche-y and creamy. Lovers of old-style Champagnes are encouraged to look closely at these. More recent cuvees have shown a silken complexity that?s consistent enough to infer the design of a knowing hand." ~ Winery notes 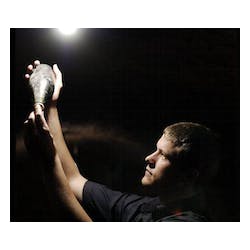 The vineyards of Merfy, seven kilometers north of Reims, lie on the southern slopes of the Massif de Saint-Thierry in the Montagne de Reims. These slopes were planted shortly after the arrival of the Romans and monks of the neighboring Abbey of Saint-Thierry expanded the vineyards in the 7th century. By the 9th century, the vines surrounding the abbey represented the single largest concentration of vines in Champagne and the wines from Merfy earned a great reputation and found their way to the Royal table.
With Chartogne-Taillet one appreciates the significance of terroir. Theirs is an example of just how wonderful wines can be simply because of how talented and conscientious they are. Their land, while good (Merfy is "84%" on the Echelle de Crus) is not aristocratic, and I'm certain if we could transplant them to, say, Aÿ or Mesnil they'd promptly take their place among the elite.

Chartogne-Taillet is based in Merfy, where the majority of the estate's holdings are, and remains the only RM producer in the village. The soil in Merfy is clay, sand and sandstone over chalk, forcing the roots of the vines to "live in two environments" as Alexandre Chartogne puts it. Alexandre, now in charge of the cellars at Chartogne-Taillet, worked with Anselm Selosse in Avize and applies Selosse's ideas in the cellars and vineyards in Merfy. Alexandre vinifies each parcel individually some in stainless steel and a growing number in neutral barrique.

The family's holdings in Merfy include the Chemin de Reims vineyard, a site mentioned in viticultural writings from the ninth century. Today, chardonnay from the Chemin de Reims vineyard is used in Chartogne-Taillet's tete du cuvee, Cuvee Fiacre. This cuvee is named for Fiacre Taillet, born in the beginning of the 18th century, who kept records of wine making almost three hundred years ago. This tradition is carried on by Alexandre Chartogne today

"I wasn't surprised when Alexandre assumed the estate, and I wasn't surprised that he was ambitious. What did surprise me, and continues to surprise me, is that he is the most passionately curious vigneron I know, not only in Champagne, but just maybe anywhere. He is pursuing something that doesn't take the form of accolades though these will surely come--and hardly even asks for answers. It's a quest for a kind of immersion, an unquenchable desire to experience.

Please note; to experience, not to "know". This year it was just him and me, tasting and talking; we did dosage trials of several wines, and this takes a person to the essence of tasting. The more we tasted the more wonderfully unknowable things seemed to be. Yes, it was possible to establish where the wines were most delicious and expressive, and the two of us agreed almost eerily. But even then, it was impossible to predict what would work, and each formulation you tried to make was smashed by the next sequence of wines. I believe that Alexandre Chartogne is the most exciting young producer in Champagne. And I also believe he drank from the fountain of wisdom when he said to me, "I do not feel good when I'm sure about something." Because that's how you measure the hunger in a man's soul. It begins with a new/old approach to vineyard work, bio-dynam-ish, one might say. Critters (sheeps and horses), soil analyses of remarkable detail, each aspect of viticulture challenged and changed as necessary. Cellar-work is also excitingly new. Indeed there's almost too muchinformation to give here. Alexander's blog is a lovely source for info and updates, and the estate's website gives all the basics. Suffice to say there's a vivid spirit of inquiry here, the likes of which I have never seen in this habit-riven region."
-Terry Theise

"Champagne Chartogne-Taillet is produced exclusively from grapes grown in the family's vineyards at Merfy and neighboring Saint-Thierry and Chenay. Thirty parcels totaling 11 hectares consist of vines averaging 25 years old. Winemaker Philippe Chartogne was trained in Beaune where he learned the respect for the terroir and the passion for vinification. "Respect for the terroir means preserving old vines as long as possible, limiting yields and analyzing the soil of each parcel in respect of nature. Passion of vinification means tasting the berries long before the harvest in each parcel more than once, selecting very strictly at the harvest, a long and soft pneumatic pressing parcel by parcel, tasting the run-off juice and separating the 'cuvée' from the 'taille' before the vinification and blending the different cuvées."
-Dr. Phillip Blom, Decanter, 12/00

Empire customer on Jan 6, 2011  [Verified Purchase]
Scroll to the top of this page