Weather
2020 was marked by very mild temperatures and contrasting precipitation: heavy spring rainfall was followed by an intense summer drought. The fairly mild winter led to early bud break. The summer heat gave way to cool nights in late August, ideal for ripening grapes.
About Chateau Bonnet
The vineyards of Chateau Bonnet were planted during the 16th century, by the Reynier family, wealthy merchants from Libourne. In a mere 30 years, the landscape around the house was transformed, as vines replaced forest on the surrounding slopes.
Château Bonnet lies to the North of the Entre-Deux-Mers, on the clay-chalk slopes of the commune of Grézillac, overlooking the Dordogne valley some 10km south of Saint Emilion. The estate dates back to the 17th century; when André Lurton took over in 1956, it comprised 30 hectares of vineyard, which he immediately undertook to renovate and develop.

Today, half Bonnet's production is devoted to a highly popular dry white (AOC Entre-Deux-Mers), a blend of Sauvignon, Sémillon and Muscadelle grapes, carefully vinified to preserve the freshness and bouquet of these varietals.

The other half is composed of classic red varietals - Merlots, Cabernet Francs and Cabernet Sauvignons - producing noteworthy clarets widely held to be superior to the general run of the appellation.
View all Chateau Bonnet 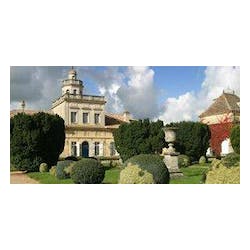