Ship "12" Free when you mix or match a 12 bottle case! more...
Chateau de Beaucastel Chateauneuf du Pape 2006 ships free when purchased by the 12 bottle case! — Fill a 12 bottle case with this item or any of our other 400+ eligible free shipping items and that case ships for free! Note that there is no limit to the number of cases you can have shipped for free so long as they are filled with eligible "Ship 12 Free" items.
Wine Spectator 95
Powerful, with a round, almost creamy core of blackberry and raspberry fruit all layered with cocoa, sweet toast, mesquite and fig paste. Long and rich through the finish. Still quite primal, with lots in reserve. Best from 2010 through 2030.-WS

Wine Advocate 95
As I stated last year, there is no Hommage a Jacques Perrin in 2006, but Beaucastels 2006 Chateauneuf du Pape is performing even better from bottle than it did last year. Its ... read more

Wine Spectator 95
Powerful, with a round, almost creamy core of blackberry and raspberry fruit all layered with cocoa, sweet toast, mesquite and fig paste. Long and rich through the finish. Still quite primal, with lots in reserve. Best from 2010 through 2030.-WS

Wine Advocate 95
As I stated last year, there is no Hommage a Jacques Perrin in 2006, but Beaucastels 2006 Chateauneuf du Pape is performing even better from bottle than it did last year. Its dense plum/ruby/purple color is followed by a big, sweet perfume of black truffles, camphor, earth, incense, new saddle leather, and loads of peppery, blackberry, and herb-infused, meaty, black cherry fruit. Deep, full-bodied, and dense, with sweet tannin, this explosively rich Chateauneuf is a stronger effort than the 2005, 2004, or 2003. Anticipated maturity: 2012-2028.-WA

Jeb Dunnuck 94
A fantastic wine, the 2006 Chteau de Beaucastel Chteauneuf-du-Pape fleshes out with air and displays deep, earthy aromatics of dark fruit, roasted meat, graphite, mushroom and old wood. In the mouth, the wine displays a medium to full bodied, structured personality to go with a fantastic texture, concentrated fruit and a long finish. If drinking anytime soon this needs plenty of air.-JD

The thirteen grape varieties of the Chteauneuf-du-Pape appellation with a strong percentage of Mourvdre and Grenache (30 each), Syrah 10, Counoise 10 Cinsault 5 and the rest divided up amongst the remaining grape varieties: Vaccarse, Terret noir, Muscardin, Picpoul, Picardan, Bourboulenc, Roussanne.
The Grenache and the Cinsault give the wine its color, intensity and softness. The Mourvdre, Syrah, Muscardin and Vaccarse give the wine its renowned ageing potential and dark, classic character. The Counoise, Picpoul and other varieties provide freshness, fragrance and aromatic quality.-Winemaker Notes 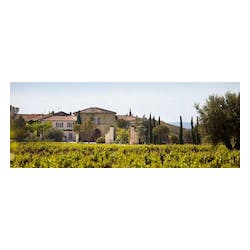