View Cart / Checkout
Loading... Loading cart
Total:
—
View Cart / Checkout
0
Cart
Delivery
Search
Menu
Home » Wine » Red Wine » Rhone Blend Red » Chateau de Rouanne Vinsobres 2018
Sample Image Only
Chateau de Rouanne Vinsobres 2018
Ship "12" Free when you mix or match a 12 bottle case! more...
Chateau de Rouanne Vinsobres 2018 ships free when purchased by the 12 bottle case! — Fill a 12 bottle case with this item or any of our other eligible free shipping items, and that case ships for free! Note that there is no limit to the number of cases you can have shipped for free so long as they are filled with eligible "Ship 12 Free" items.
Raspberry, violet, licorice, peony, black pepper and gingerbread. Greatly textured with prominent saltiness and length in the finish. The distinctive freshness and saltiness of this Grenache, Syrah, Mourvèdre blend makes it easy to pair with both rustic and sophisticated dishes. The smooth, red-fruit character of the wines make it a great choice for tomato-based dishes such as ratatouille, while the richness from the Syrah also allow it to pair with lamb, venison or beef.
12 Free
Item Sold Out

The vineyard of Château de Rouanne is a unique one-block monopole, planted entirely with 50+ year old vines, which are a selection massale of Grenache, Syrah and Mourvèdre. The ancient terroir is comprised of limestone and sandy marl soils dating back to the Pliocene epoch.

Barruol uses whole bunches during fermentation, as the stems absorb alcohol and help retain acidity and tannin. Indigenous yeasts are used to impart the character and the purity of the terroir into the wine. The wine is aged for 16 months in concrete vats and is bottled unfined and unfiltered in order to deliver a "straight to the ground" interpretation of this unique vineyard.
View all Chateau De Rouanne 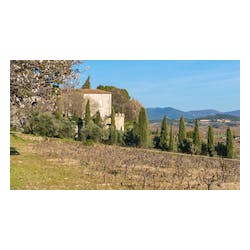 No questions posted yet about this item.
great goto wine
"We tried a case of this and found it a great goto dinner wine. Would recommend it highly to someone who enjoys a medium bodied red and is not looking for something big."
Posted byJerry on Oct 26, 2020Verified Purchase
Subscribe to our newsletter!