$8.95
4.5 of 5 (2 reviews)
It may sound odd, but this wine is both rustic and clean. Elegant and approachable without being one-dimensional.

A gorgeous blend of 90% Carignan and 10% Syrah that will reward you with juniper berries, red plums, earthiness, a whiff of lilac and a very subtle hint of pistachios on the nose (seriously). Dont be swayed by all this lovely fruit and flowers however; this wine has some genuine backbone with plush tannins and is well ... read more
Item ID: #44790
Winery: Chateau D’oupia
Location at store:95b
Category: Languedoc-Roussillon Red
Region: France » Languedoc-Roussillon
Size: 750mL (wine)
Closure: Cork
Other vintages
Share this item on FacebookFollow Empire Wine on TwitterFollow Empire Wine on Pinterest

It may sound odd, but this wine is both rustic and clean. Elegant and approachable without being one-dimensional.

A gorgeous blend of 90% Carignan and 10% Syrah that will reward you with juniper berries, red plums, earthiness, a whiff of lilac and a very subtle hint of pistachios on the nose (seriously). Dont be swayed by all this lovely fruit and flowers however; this wine has some genuine backbone with plush tannins and is well balanced by its acidity. "Drink it all day long" kind of wine!

Robert Parker of The Wine Advocate has consistently praised this estate and rated the wine a best buy. He wrote: Chteau d'Oupia has produced the ideal bistro wine. Dark, ruby-colored, the wine is wonderfully clean and pure, with an exuberant personality, and gobs of rich, peppery, red and black fruit...Bravo to proprietor Andr Ich!

Andr passed away in late 2007. His daugher, Marie-Pierre, currently runs the estate. She's been working with oenologist Laurent Batlle since 2008, who continues to make the wine -in his own words- "Andr's way."

View all from Chateau D’oupia 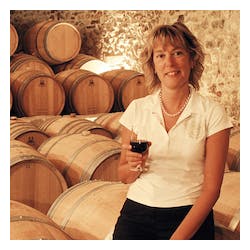 The late André Iché was one of the first winemakers in the Languedoc to break from the local co-op, purchase his own bottling line, and focus on quality above quantity. The winery is now run by André's daughter Marie-Pierre and winemaker Laurent Battle.

A fond memory of André Iché by Joe Dressner, which pretty much says it all:

"It is going to be difficult to imagine a wine world without André. We often talk about terroir, but André lived that notion, he almost seemed the personification of those windy Languedoc vineyards. André had made quite a bit of money when everyone was producing bulk table wine that was made at enormous yields, virtually unregulated, and which sold briskly. By the early 1970s though, he was one of the first vignerons in the area to embrace the notion of going from table wine to an AOC and was one of the pioneers of the Minervois AOC, which started in 1973.

"Over three decades, he accumulated fabulous sites, often bought for a symbolic franc, which he converted into great vineyards. The great paradox of the area was that there was all that great terroir in old vines but no one wanted it; the wines sold too cheaply and no one really knew how to make the transition to quality rather than quantity. André was the only independent winemaker in Oupia, all his neighbors brought their wine to a coop and received pennies per liter. André loved the land he accumulated and worked his vines until his doctors told him to stop. He had several employees, but loved nothing more than touching, guiding and working his land.

"He had already paid everything off and made his money and rather than try only to make expensive super-cuvées, he was able to produce a range of affordable and delectable wines which sold quickly and gave great pleasure to people who followed his work. He wound up with nearly 60 hectares and managed to run it economically and profitably at a time when the Languedoc is facing an economic catastrophe. It used to be such a great pleasure for us to visit André and to tour the vineyards with him. There was so much love and devotion, such an intimate relationship to the land. The first time we went he took us to a hill overlooking the town of Minerve to view the gorges and canyons surround that famed city. André told me there was nothing like that in America but I told him he was wrong, that we have beautiful sites and beautiful natural settings. André said, where do you have a view of nature that has been cultivated by man in much the same way for the past ten or eleven centuries. He had a point."

"Great table red one for everyday!"

"Not bad for the price."