Item Sold Out
Notify me when this item is available
Wine Enthusiast 92
“A dense wine with great fruit, this has a velvet texture and great elegance. There is structure of course from the firm tannins that stay in the background, while the main thrust of this wine is its great blackberry fruit. It will age and should be drunk from 2025.” ~R.V.
Item ID: #28207
Winery: Chateau Lalande Borie
Category: Bordeaux Red
Region: France » Saint-Julien
Size: 750mL (wine)
Closure: Cork
Other vintages
Share this item on FacebookFollow Empire Wine on TwitterFollow Empire Wine on Pinterest

Wine Enthusiast 92
“A dense wine with great fruit, this has a velvet texture and great elegance. There is structure of course from the firm tannins that stay in the background, while the main thrust of this wine is its great blackberry fruit. It will age and should be drunk from 2025.” ~R.V.

View all from Chateau Lalande Borie 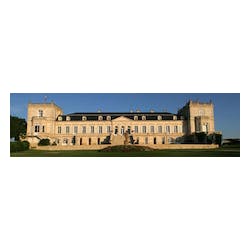 Today, it is the Jean Eugene Borie company which belongs to Mrs. Borie and her daughter Sabine Coiffe and son Bruno-Eugene, which runs Château Lalande-Borie and Château Ducru Beaucaillou. It only took Château Lalande Borie a couple of years to acquire a great reputation.

An icon of balance and tradition, St. Julien boasts the highest proportion of classed growths in the Médoc. What it lacks in any first growths, it makes up in the rest: five amazing second growth chateaux, two superb third growths and four well-reputed fourth growths. While the actual class rankings set in 1855 (first, second, and so on the fifth) today do not necessarily indicate a score of quality, the classification system is important to understand in the context of Bordeaux history. Today rivalry among the classed chateaux only serves to elevate the appellation overall.

One of its best historically, the estate of Leoville, was the largest in the Médoc in the 18th century, before it was divided into the three second growths known today as Chateau Léoville-Las-Cases, Léoville-Poyferré and Léoville-Barton. Located in the north section, these are stone's throw from Chateau Latour in Pauillac and share much in common with that well-esteemed estate.