3 of 5 (1 review)
Item Sold Out
Notify me when this item is available
While this item isn't currently available:
Tasting notes
Beautiful dark ruby color with quite an intense bouquet bringing together aromas or red ripe berries as well as spicier vanilla notes. On the palate the wine is incredibly round with a dense tannic structure, yet not overly massive. Great freshness finished off by slight mineral undertones and a silky texture.

Tasting notes
Beautiful dark ruby color with quite an intense bouquet bringing together aromas or red ripe berries as well as spicier vanilla notes. On the palate the wine is incredibly round with a dense tannic structure, yet not overly massive. Great freshness finished off by slight mineral undertones and a silky texture.

Vinification
The wine of Chateau Larose Trintaudon is vinified in temperature controlled, stainless steel vats. Malolactic fermentation takes place in tank. The wine is aged in 20% new, French oak barrels for an average of 12 months before bottling. The estate also produces a second wine Les Hauts de Trintaudon which represents another great value.

Appellation
The Haut-Mdoc is a sub-appellation within the larger Mdoc appellation on the left bank of Bordeaux. Situated between the Gironde estuary that runs down to the city of Bordeaux and the Atlantic coast, this is the home of some of Bordeauxs famous chateaux. The six famous communes of the Mdoc are contained within its boundaries: Margaux, Moulis, Listrac, St Julien, Pauillac and St Estphe. The vineyard land that lies outside of these communes is classified as the Haut-Mdoc; the result being that you can often find well-known Cru Bourgeois chateaux alongside the Cru Class chateaux in the same appellation.

Estate
The massive 190 hectare vineyard of Chateau Larose Trintaudon is planted to 60% Cabernet Sauvignon and 40% Merlot. The estate is one of the largest in the entire Bordeaux region. The terroir is a blend of sand, clay and limestone soil. Some of the vines are located next to Pauillac. In fact, Chateau Latour purchased a parcel of vines from the estate several years ago that was located in the Pauillac appellation. The vines are on average close to 30 years of age. The vineyard is planted to a vine density of 6,600 vines per hectare. The vineyards of Chateau Larose Trintaudon are farmed with an effort to use self-sustaining farming techniques.

History
Chateau Larose Trintaudon's vineyards were first planted in 1838. The beautiful chateau was built in 1870 by the owner at the time, Comte Ernest de Lahens. During the late 1800s, the property was even larger than it is today as Ernest de Lahens was able to increase the size of their vineyards to 345 hectares of vines. 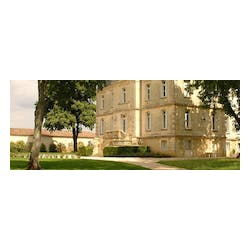 Empire customer on Nov 7, 2021  [Verified Purchase]
Scroll to the top of this page