Ship "12" Free when you mix or match a 12 bottle case! more...
Chateau Maucoil Chateauneuf du Pape Blanc 2018 ships free when purchased by the 12 bottle case! — Fill a 12 bottle case with this item or any of our other 400+ eligible free shipping items and that case ships for free! Note that there is no limit to the number of cases you can have shipped for free so long as they are filled with eligible "Ship 12 Free" items.
Light gold in color with a hint of green, with rich aromas of pear and finger limes on the nose. Clean and bright on the palate with flavors of stone fruit and white flowers.

Light gold in color with a hint of green, with rich aromas of pear and finger limes on the nose. Clean and bright on the palate with flavors of stone fruit and white flowers.

The Chateau Maucoil estate dates back to the Roman empire, When the site was planted with vineyards for Caesars legions and new occupants. The Chateau itself was established in 1624 and is located in the heart of the Chateauneuf-du-Pape appellation, with vineyards spanning the neighboring region of Ctes-du-Rhne Villages.
Throughout its history, Chateau Maucoil has been under the care of several different illustrious wine growing families, but it is now owned and managed by the talented winemakers Frederic and Benoit Lavau. The story of the Lavau family, with its passion for wine and its love of the terroir and the land, began in Saint-milion in the 19th century, and is evident in the care and commitment they pour into running the Maucoil estate. With the Consulting advice of famed French winemaker Stephane Derenoncourt, the Lavau brothers have been making stellar and highly awarded wines.
The 45 hectares of vines in the Chteauneuf-du-Pape appellation have been tended using certified organic viticultural methods since 2011. The Lavau family tends their vineyard with maximum respect for the environment, allowing the vines to grow naturally with care, precision and patience resulting in beautiful, terroir driven wines.

View all from Chateau Maucoil 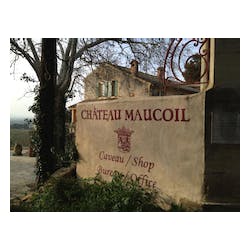 One of the oldest Chateau in the region, Chateau Maucoil's oldest parts date back to the 1st century, when a Roman legion formed a camp here around a natural spring, today called La Source de Chateau Maucoil. Located in Chateauneuf du Pape in Orange, which is named for the Dutch Prince of Nassau-Orange who resided here in the 13th century when Seigneur Joseph de la Pise first planted vineyards here, the estate is referenced in Pise's 1,000 page tome entitled, "Tableau de l'Histoire es Princes et Principaute d'Orange", which sits beneath a glass dome in the winery's tasting room. It is from this illustrated text that the family drew the inspiration for their wine labels.