Item Sold Out
Notify me when this item is available
Wine Enthusiast 94
This wine seems to be all about structure and tannins. The fruit comes through slowly and has a way to go in its development. But black currants are there, ripe and promising well for the future. Just don't drink before 2025.

Wine Enthusiast 94
This wine seems to be all about structure and tannins. The fruit comes through slowly and has a way to go in its development. But black currants are there, ripe and promising well for the future. Just don't drink before 2025.

Wine Spectator 92
Alluring, with plum and fruitcake notes that are lushly textured, picking up mesquite, black tea and melted licorice flavors along the way. Keeps the warm, enveloping feel going through the finish, with the fruit dripping steadily. Best from 2020 through 2038.

View all from Chateau Talbot 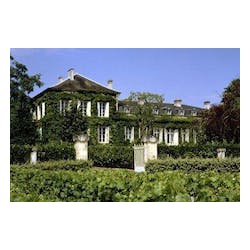 From the plateau of Saint-Julien, one can spot Château Talbot in the distance in the midst of an ocean of vines, parks and tall trees.

The estate has a rich history. Its name originates with Connétable Talbot, Earl of Shrewsbury, governor of Guyenne as well as being a famous English military commander, who was defeated at the battle of Castillon in 1453.

In 1855, at the time of the Médoc and Graves growth classifications ordered by Emperor Napoleon III, Château Talbot was promoted as a fourth classified growth of Saint-Julien. For several decades it belonged to the Marquis of Aux and was the purchased in 1918 by Désiré Cordier.

A Médoc Grand Cru Classé, Château Talbot comprises 110 hectares of a single vineyard in the heart of the Saint-Julien commune, an outstanding appellation as it counts no fewer than 11 classified growths.

Ideally situated on the banks of the Gironde estuary on hilltops of alluvial gravel carried by the Dordogne River from the Massif Central and from the Pyrenees by the Garonne, Château Talbot's terroir is exceptional.

The totality of the 110 hectares of the Château Talbot vineyard surrounds the estate house and stretches north, all the way to the border with the Pauillac appellation. Planted on a terroir of fine Gunzian gravels with a core of fossil-rich limestone, which form draining hilltops, one finds a large majority of red vines (105 hectares) and a small acreage of whites (5 hectares).

The impeccable management of the vineyard is one of the most irreproachable in the Medoc. The wines, supervised by Nancy Bignon-Cordier, with the valuable advice of enologist Eric Boissenot and consultant Stéphane Derenoncourt, are consistently rich while remaining extremely elegant.

The smooth taste and their silky tannins make it possible to drink them young as well as after prolonged aging. With time they develop a delicate, complex aromatic bouquet with tones of cedar and Havana tobacco.