store shelf
Wine Advocate wa 92
this is a 375mL (wine) which is smaller than a regular 750mL bottle.

Winery: Chateau Thivin
Category: Beaujolais
Size: 375mL (wine)
Alcohol by vol: 14.1%
Closure: Cork
Item ID: #49051
Location at store: 133d
Region: France » Cote de Brouilly
Other Similar Items
$15.95 WE 93
Michel Tete 'Cuvee Tradition' Julienas 2020
$11.95 WA 92
Domaine Madone 'Perreon' Gamay 2020
$20.95 WA 92
Bernard Diochon Moulin a Vent VV 2021
$17.95 VM 92
Maison L'Envoye Morgon Cote du Py 2019
$19.95 WA 91
Domaine des Marrans Fleurie 2021
$9.95
Louis Jadot Beaujolais Villages 2021
$17.95
Laurent Perrachon et Fils Julienas 2020
$20.95
Clos de la Roilette Fleurie 2021
$15.95
Dufaitre 'Premices' Beaujolais 2021
$16.95
Domaine Blain Soeur & Frere Brouilly 2019
$13.95
Domaine Dupeuble Pere & Fils Beaujolais 2021
$17.95
Domaine De La Grosse Pierre Chiroubles 2020
Information
Questions
Size / Vintage Options
Reviews
Item Description
Wine Advocate 92
“The 2021 Côte de Brouilly has turned out nicely, mingling aromas of cherries and berries with notions of burning embers and forest floor. Medium-bodied, fleshy and vibrant, with a lively core of fruit, powdery tannins and a sapid, saline finish, it marks a return to a more classically proportioned style after several richer, riper vintages. This tasting note refers to the cuvée imported in the United States, but readers in the rest of the world will find that the estate's Sept Vignes bottling, which sees a light filtration, is very similar in profile.”
About Chateau Thivin
It is no surprise that Château Thivin is the benchmark domaine of the Côte de Brouilly; everything about it is exceptional. Built in the fifteenth century on an ancient volcano which juts out steeply into the valley below, Thivin is the oldest estate on Mont Brouilly. Even more important, however, is its tremendous success since farmer Zaccharie Geoffray purchased the château with its two hectares of land at auction in 1877. His son Claude expanded the property over the next few decades, and his son, also named Claude, boosted the prestige of the zone in the face of the Great Depression when he played a pivotal role in the creation of the Côte de Brouilly appellation. With his wife Yvonne, he also helped to bring greater recognition to the entire region with the establishment of the Maison du Beaujolais in 1953. Over the years the family continued to promote the appellation, receiving many influential artists and journalists at the château. The French novelist, Colette, wrote admiringly of her visit to Thivin, for example. In 1976, Richard Olney took Kermit to visit on their first wine trip together. It was Olney's top recommendation in the whole of the Beaujolais region. The current generation of the Geoffray family continues their tradition. Today their grandnephew Claude, his wife Evelyne, and their son Claude-Edouard continue the tradition as staunch and proud defenders of the terroir of the Côte de Brouilly.
View all Chateau Thivin 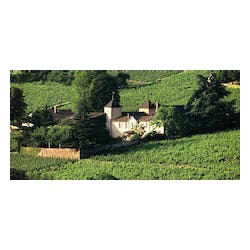