"Cherry Pie is another innovative offering from visionary winemaker Jayson Woodbridge, creator of Hundred Acre and Layer Cake Wines. One would think with the myriad winemaking projects that  ... read more
Item Sold Out

Jayson sought out the owners of Stanly Ranch, on the Napa side of the Los Carneros appellation, as their grapes were some of the most sought after Pinot Noir grapes in California. They told him they would give him a small allocation to make wine, but future allocations would depend on the quality of the wine he made. After tasting his 2007 Pinot Noir from the barrel, and deeming it one of the best ever made from their grapes, the owners of the ranch granted him free rein to choose from the very best blocks of the property for his wine.

Then, in early 2008 while perusing New York's Soho District, Jayson happened upon the Campton Gallery during its exhibition of paintings by artist TR Colletta. Jayson was particularly drawn to a compelling oil on canvas of a juicy, mouthwatering, hot-out-of-the-oven cherry pie. He instantly knew this was to be the label and the name for his Pinot Noir still in the barrel – Cherry Pie.
View all Cherry Pie 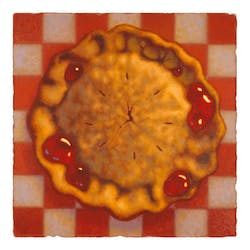 No questions posted yet about this item.
Cherry Pie Three Vineyards offers value
"I agree that the naming is oddly close to the Stanly Ranch offering. Regardless I found the Three Vineyards bottle to be pleasantly bright and fragrant. Our guests enjoyed it greatly. I feel that the bottle is priced fairly and delivers exceptional value for the price point."
Posted byRuss on Apr 6, 2018Verified Purchase
Cherry Pie
"It was okay. Liked the 2014 better."
Posted byVictoria on Apr 16, 2018Verified Purchase
No complexity
"I’m disappointed with this new offerring essentially replacing the excellent for the price Cherry Tart, which is no longer available. Not only is this new blend rather flat with little or no complexity, they named it the same as their much more expensive Cherry Pie offering."
Posted byEfrain on Dec 1, 2017
Subscribe to our newsletter!