Fred never lost his love for the soil. With new bride Nancy Bunting, he embarked on a mission to bring Rhone-style wines to American dinner tables. Restoring vines that were decades old, some over 100 years, Fred and Nancy produced Mourvedre, Carignane, Marsanne, Roussane and Viognier. He also planted acres of what would become legendary Cline Cellars Zinfandel.
In 1993, Fred and Nancy moved the winery to a 350-acre ranch in the famed Carneros Valley in Sonoma County. There the Clines planted Merlot, Chardonnay, Pinot Noir, and Syrah. They opened a tasting room in the 1853 farmhouse, and renovated the grounds to highlight the history and pastoral beauty of the property.
Today, the Clines own many acres of vineyards throughout Sonoma County, with other properties in Oakley and Tehama. Passionate about the importance of history, they own and have restored the nearby Dillon Beach Resort, the Mizpah Hotel in Tonopah, NV, and the Villa Laura in Tuscany. They also operate Green String Farm, a 150-acre working farm that produces a variety of fruits and vegetables grown on soil that is tended and nurtured without toxic chemicals. The produce from Green String is used by such culinary luminaries as Alice Waters of Chez Pannise.
View all Cline Cellars 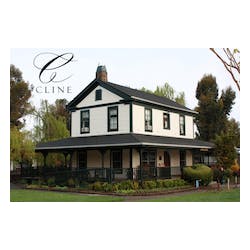