Our store is open to the public today (Monday) from 9am to 9pm
Please be patient with us as we deal with extremely high order volume as a result of the Coronavirus. At least 24 hours is required to prepare all orders including pickup and shipping. Delivery dates / pickup times are just estimates and delays are possible.

$57.95
NOTE: This item is not available for immediate pickup at our store.

James Suckling 97
" A very distinctive nose with a wild array of red berries and cherries and a thread of blue fruit, too. Theres a dried wild-rose perfume and a violet-like thread with subtle, herbal-based notes. Its a moving target in the glass with incredible complexity. This has a gift of revelation. The palate has a very assertive edge with a powerful core of intense tannins that carry a spicy thread of rich dark cherries ... read more

James Suckling 97
" A very distinctive nose with a wild array of red berries and cherries and a thread of blue fruit, too. Theres a dried wild-rose perfume and a violet-like thread with subtle, herbal-based notes. Its a moving target in the glass with incredible complexity. This has a gift of revelation. The palate has a very assertive edge with a powerful core of intense tannins that carry a spicy thread of rich dark cherries and dark plums in a defined, savory and athletic stance. A star of the vintage. Drink over the next decade or more."

The Wine
Jessie Vineyard was established in 1994 after founder of Cristom Vineyards, Paul Gerrie, saw the potential of a steep, wooded, east-facing hillside when the property was purchased in 1992. When planting began in 1994, the vineyard was named after Pauls paternal grandmother Jessie Summers.

Jessie Vineyard tends to produce Pinot Noirs that exude an enticing scent of purple and blue floral notes that make the wine instantly appealing. Drawn in by the deep floral aromas and minerality, Jessie can also be recognized by savory aromas that often call to mind rare-beef. On the palate, black fruits and a deeper-darker-fuller mouth-feel and alluring texture can often characterize Jessie Vineyard Pinot Noirs.

The views from the top of the east-facing Jessie Vineyard are some of Cristoms most spectacular. On a clear day, the Cascade Mountains (including Mt. Jefferson, Mt. Hood, and Mt. Adams) sparkle. First released with the 1998 vintage, Jessie is typically deep, rich and floral with multiple layers of flavor.

The maritime climate of Jessie Vineyard has moderately warm days, especially cool nights and strong nightly winds that cool the vines and the fruit allowing the clusters to retain acidity and produce wines of great structure and length. As our steepest estate vineyard, the Pacific Ocean winds that flow through the Van Duzer Corridor rush down Jessie Vineyard with nightly gusts of 20-25 mph throughout the growing season. The corridor allows cool marine breezes to flow east into the Willamette Valley and moderate high summer temperatures, move air through the canopy lowering disease pressure and cools the vines. This cool ocean air results in low temperatures at night and helps to maintain good acid structure in the wines. Due to our altitude and location at the 45th parallel, there is a high diurnal temperature variation meaning that there is a significant difference (often 35 degrees or more) between Jessies daytime high and nighttime low temperature during the growing season. This significant temperature shift preserves the natural acids in the grapes, helps encourage the grapes to ripen slowly, and often can result in later picking dates and thus more hang-time on the vine.

Ranging in elevation from 320 ft to 550 ft (98 m to 168 m), this 11.53 acre (4.67 hectare) site is one of the steepest planted in the Willamette Valley and our most challenging to farm. The entire vineyard is planted at the high density of 2,311 vines/acre (5,710 vines/hectare) and is notorious at the estate for its shallow soil at the top of the hillside. The strategy to plant densely creates competition among the neighboring vines and forces the roots deep into the topsoil, yielding smaller clusters and producing more concentrated flavors. The shallow, 15.5 million year old Columbia River Basalt soils known as Witzel and Ritner run the western edge of the vineyard at the top of the hill and are the most shallow soils on the entire estate. The vines struggle here these soils have a natural devigorating effect on the vines, slowing vegetative growth and focusing the plants energy on fruit production. Deeper basalt soils including Jory and Nekia, that both have greater water holding capacity, extend down the steep hillside and the eastern edge of the vineyard boasts some of the deepest soils on the Cristom estate 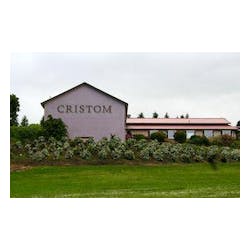 It was the promise of great wines that first drew Paul and Eileen Gerrie, owners of Cristom Vineyards, to Oregon. They conceived of a place where the succulent Pinot Noir grape could achieve its fullest expression – complex, hand crafted wines that are bold yet balanced: both powerful and elegant. Their wines evolve as they age, revealing ever grater richness and complexity with time. The abundance of soils and slopes in the hills of Oregon defined the Gerrie's vision of world class Pinot Noir. The warm winds of summer held the promise of rich Chardonnay, the cool sunny autumn yielded tart Pinot Gris. Since the inaugural vintage in 1992, the Gerries, along with winemaker Steve Doerner, have been producing wines that are considered the benchmark in Oregon and have made Cristom, named after their children, Christine and Tom, a veritable household name.