Ship "12" Free when you mix or match a 12 bottle case! more...
De Martino Vigno 2013 ships free when purchased by the 12 bottle case! — Fill a 12 bottle case with this item or any of our other 400+ eligible free shipping items and that case ships for free! Note that there is no limit to the number of cases you can have shipped for free so long as they are filled with eligible "Ship 12 Free" items.
While this item isn't currently available:
Wine Advocate 96
The 2013 Vigno Single Vineyard La Aguada is part of the Vigno association of producers of Carignan (Cariñena) from the Maule Valley. The wine is produced from a field blend from an ungrafted, dry farmed, head-pruned old vineyard called La Aguada in Sauzal, with approximately 85% to 90% Carignan and 10% other red varieties (Malbec, Cinsault, Carménère, Cabernet Sauvignon...); these vines were planted in 1955 on granite soils. The secret here is to ... read more

Wine Advocate 96
The 2013 Vigno Single Vineyard La Aguada is part of the Vigno association of producers of Carignan (Cariñena) from the Maule Valley. The wine is produced from a field blend from an ungrafted, dry farmed, head-pruned old vineyard called La Aguada in Sauzal, with approximately 85% to 90% Carignan and 10% other red varieties (Malbec, Cinsault, Carménère, Cabernet Sauvignon...); these vines were planted in 1955 on granite soils. The secret here is to mature the wine in large volume oak containers, something they are doing with all of their top wines that has worked really well. 2013 is a year with better natural acidity than previous years, while alcohol levels were moderate, yields were naturally high and they had to work to contain them. The grapes fermented with indigenous yeasts and the wine matured in 5,000-liter oak foudres for two years. This is a wine of character, the nose has a special freshness and incipient complexity for such an early age; there are aromas of bacon, tree bark, wild berries and a pinch of spices. The palate is medium-bodied with refined, ultra-polished tannins that give elegance to that internet rusticity, while at the same time it is restrained with a certain austerity. The vintage is very marked in De Martino's Vigno bottling. This follows the verticality of the 2011, much fresher than the 2012. I've had this wine at least four times and it's quite a chameleon, sometimes showing itself more like a Syrah, sometimes it felt more Cariñena and it was always ever changing in the glass. There is a lot of complexity, and even if sometimes I felt like there was a lack of typicity, my final conclusion is that the field blend has to be the reason for such complexity and changing personality. We shall see in future vintages how the aging in the large oak vats develop, and if they are partly responsible for the wine profile. I tasted it with the other Vignos and this was completely different. For now, this is certainly world-class Cariñena, and among the best wines produced in Chile. Well done! An open bottle evolved nicely during the course of three days, which gives an indication of a robust wine resistant to oxidation, which I think should also evolve nicely and slowly in bottle. The 2011 is now a little reductive, so decant in advance. For the quality this wine delivers, the price is awesome. 13,300 bottles produced.

I met again with Marcelo Retamal and Sebastian De Martino to taste through their exciting portfolio of fresh, gastronomy-oriented wines. All the wines are produced with indigenous yeasts and without the help of any chemicals and only minimal amounts of sulphur.
2014 is a good vintage, fresh and with naturally limited yields, while 2013 was quite high yielding.
I also had the chance to visit the vineyards they have purchased in Itata, where I feel the potential is still to be fully exploited; the source for their Vigno, an old plot named La Aguada, is a vineyard planted following the contour lines rather than in straight lines in the outskirts of Sauzal. De Martino is one of the quality leaders of the newer Chile.

View all from De Martino 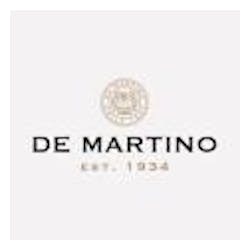 From the beginning of our winery in 1934, we have worked to create wines that represent us as a family. Our philosophy is summarized in creating wines that reflect their origin in the purest way possible, bringing origin and balance together.
Over the years, we have explored more than 347 vineyards throughout Chile, thus covering most of the Chilean territory from north to south and from the Andes Mountains to the coast. That is how we have selected the vineyards that best represent our philosophy and which we believe have the highest potential.
Our agricultural practices are based on organic principles and timely harvest, with the aim of achieving balanced wines. Our wines are exclusively fermented with native yeasts, disregarding enological components that may alter their personality. Likewise, aging is made in stainless steel, concrete, 5.000 litres foudres, used barriques (in average ten years old), so that the imprint of our wines reflects their origin without alterations.